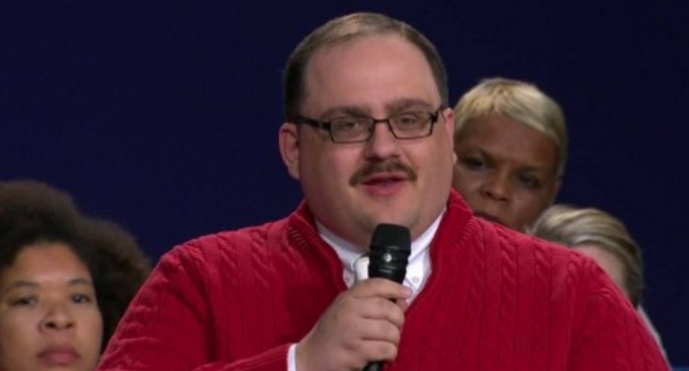 The affable red-sweatered guy who stole the spotlight in Sunday’s presidential debate known as Ken Bone is still getting plenty of attention. Instead of garnering further praise for being the heartwarming average Joe he seems, focus has shifted to his less than commendable digital presence, specifically on massively influential link aggregator Reddit.com.

The first red flag about the truth behind the borders of the Bone Zone came when he violated FTC regulations in an attempt to cash in on an his newfound fame with a tweet for Uber. Bone failed to declare—and let’s cut him some slack on this, maybe he didn’t know—the tweet was actually sponsored by the ride-sharing service.

Things only get worse when Bone agreed to do a Q&A for Reddit’s wildly popular Ask Me Anything (AMA) section. Bone used his longstanding Reddit screen name StanGibson18 for the AMA. Unfortunately for him that was the same handle he’d used to write some questionable remarks in other subreddits in the past.

…But the cherry on top of Bone’s shit sundae came when it was discovered that as StanGibson18 he’d given a detailed description of how he forged insurance documents so he could keep his job as a pizza delivery man.

Hey, at least when commenting on Jennifer Lawrence’s stolen nude pics he had the good sense to not blame Lawrence for not being more careful with those photos… oh, never mind.

We’d suggest everyone exiting “Bone Zone” before this gets any worse.