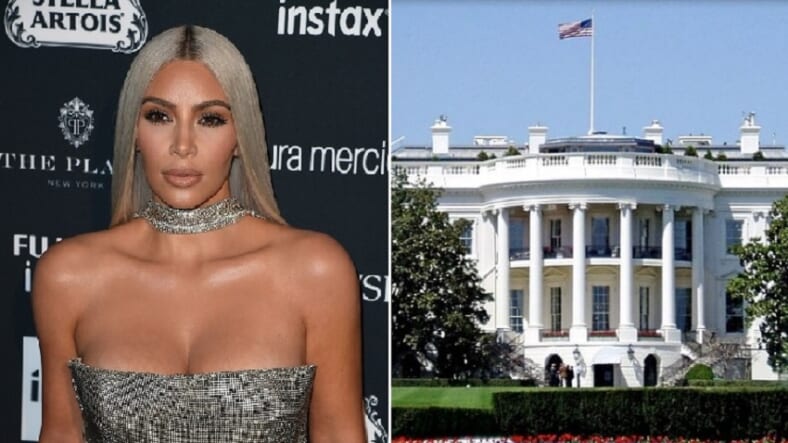 Instead of taking selfies while lounging on the beach, Kim Kardashian is spending her Wednesday at the White House.

She’s there for a meeting with Jared Kushner and President Trump, and she’s representing a good cause: prison reform.  The issue came to Kardashian‘s attention when she learned of 62-year-old great grandmother Alice Johnson, who has been in prison for her one and only drug offense for two decades.

Vanity Fair reports that after Kardashian learned of Johnson’s story via Twitter, she pursued the opportunity to meet with the president for months, beginning with an overture to the president’s daughter, Ivanka Trump.

In her interview above, Kardashian said she’s “been in communication with the White House and trying to bring her case to the president’s desk and figure out how we can get her out.” She also said the meeting is “a huge step.”

Kardashian’s husband Kanye West has received a lot of criticism for his support of the president, but it seems clear that she’s drawing a line between this and his controversy—more importantly, it’s clear that she’s absolutely committed to getting something done. That the following tweet is from 2017 says a great deal about how serious she is.

This is so unfair… https://t.co/W3lPINbQuy

Reality stars get a lot of criticism, and much of it is understandable. Kardashian, for instance, has often been accused of narcissism due to her selfie obsession and many have declared her fame a fluke launched by her infamous sex tape.

It’s striking, then, to see her take on such a serious and complicated subject, using her celebrity to get the president’s ear.

That’s a great way of making the megaphone provided by fame work for you, and she deserves support for taking it on. Even though she’s married to Kanye.