Kimbo Slice Is Dead at 42 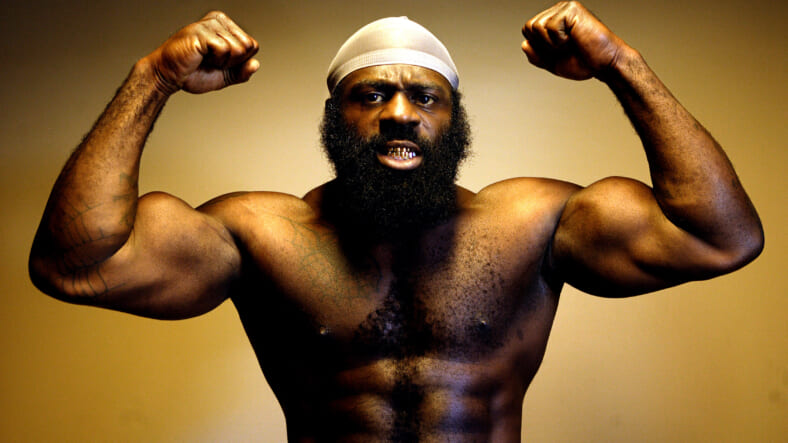 Kimbo Slice, who went from YouTube backyard fighting legend to major MMA fights in the UFC and Bellator, has died at the age of 42, according to TMZ.

Slice, whose birth name was Kevin Ferguson, was rushed to a Florida hospital on Monday night and died shortly thereafter. There is so far no official cause of death, but some reports claimed Slice suffered a heart attack.

“We are all shocked and saddened by the devastating and untimely loss of Kimbo Slice, a beloved member of the Bellator family,” Bellator president Scott Coker said in a statement, calling Slice “a charismatic, larger-than-life personality that transcended the sport.”

“Outside of the cage he was a friendly, gentle giant and a devoted family man,” Coker said. “His loss leaves us all with extremely heavy hearts, and our thoughts and prayers are with the entire Ferguson family and all of Kimbo’s friends, fans, and teammates.”

“We lost our brother today,” Slice’s longtime manager, Mike Imber, said in a text message to The Associated Press.

In the mid-2000s, Slice shot to fame as a feared backyard brawler and YouTube sensation in his native South Florida. The 6-foot-2, 225 pound heavyweight went on to compile a 5-2 pro record with four TKOs.

He was signed to Bellator MMA and scheduled to headline Bellator 158 on July 16 in London against James Thompson.

Slice, who had a brief UFC career, last fought at Bellator 149 on Feb. 19 in Houston.

He beat Dhafir Harris, aka Dada5000, in a three-round decision, but the result was changed to a no-contest after Slice tested positive for anabolic steroids and an elevated testosterone ratio.