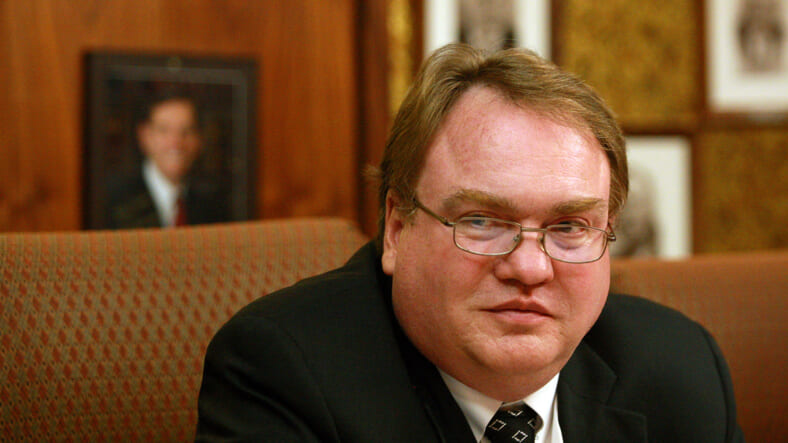 Nearly half a century after his assassination in Memphis, Dr. Martin Luther King, Jr., is still winning new adherents, sometimes from unusual precincts. According to the Great Falls Tribune, a new bid to honor Dr. King’s legacy has a highly unlikely champion. John Abarr, a former Ku Klux Klansman.Abarr is gearing up to host a celebration of at his local church, First United Methodist in Great Falls, Wyoming, honoring the civil rights hero. Jimmy Simmons, the regional chapter president of the NAACP in Caspar, Wyoming, will deliver the keynote address.

Putting the event together has not been easy. After the Tribune story ran, several of the musical guests promptly dropped out, explaining they hadn’t known about Abarr’s past when they agreed to take the gig. He’s currently working to lock down replacements. That said, this does seem like a more realistic project than the scheme he cooked up last year to establish a more “inclusive” KKK chapter that would welcome members of any race, religion or sexual orientation.

Having joined the Aryan Nations as a teenager and then ditched the group in short order to sign up with the Klan instead, Abarr is a unique choice to host an event honoring the man most Americans consider history’s greatest civil rights leader. Or maybe he’s the perfect choice. Who doesn’t love a redemption story? We got Abarr on the phone to discuss his motivation.

So tell us about this event. Well, it’s changed a bit. The keynote speaker, Jimmy Simmons, will be there. And it looks like we’ll also have Rev. Micah Hartung from Metropolitan Community Church. But we’ve run into a little problem with the music. When I originally contacted them, I didn’t say, ‘This is John Abarr, former KKK leader.’ Surprisingly, they didn’t know who I was, so both groups dropped out. But we’ve got alternative music planned.

Last year, you tried to integrate the Klan and bring in more black and LGBTQ members. Yeah, that didn’t go very well. I got lots of news media, but that’s all. Nobody else was interested. Actually, no, that’s not true! There was one black guy from California who wanted to join. But that was too far away, so I had to tell him no.

How’d you get involved with the KKK?My dad raised me with racist views, and one day when I was in high school I was watching 20/20. They had a story on the Aryan Nations and The Order. That really appealed to me at the time.

You made the switch in 1988. How come?I thought the Klan was more of an American organization, and the Aryan Nations were more interested in Germany. And plus I liked the robes. The robes were a lot cooler than anything else.

So did you dress up a lot?Actually, I was pretty much the only member up here. I didn’t go to meetings or anything most of the time. I just put out a newsletter and had a few friends, and that was about it. It wasn’t a very glamorous lifestyle. I had a robe, but what’s the point of wearing the robe if you don’t have anywhere to go to?

What was the Klan initiation like?I made a trip down to Tennessee, and some members took me to Alabama. I can’t tell you about what happened. Nothing bad, I’ll tell you that much. Bradley Jenkins, the Imperial Wizard, told me treat everybody like you want to be treated.

That’s a nice sentiment. The Klan doesn’t go around hanging people anymore. They’re just a bunch of regular guys who get together and drink beer and talk about God and Country.

Did you recruit a lot of people? I recruited about two. That’s my whole racist career [laughs]. I could have recruited a whole bunch more if I wanted people that hated blacks. I was pretty cautious about who I associated myself with.

That’s funny, given that you belonged to two of the most notorious and  widely detested organizations in the country. That’s a real good point. I didn’t want to be around hateful people. Most of the people in the Aryan Nations weren’t hateful.

I hear they’re not too fond of Jews.I’d say the Aryan Nations has a disdain for Jews, yes. They believe that the Jews are the literal children of Satan. I always had a hard time believing that. I have a friend who’s Jewish.

What inspired your plan to create a more inclusive Klan chapter?I met with Jimmy Simmons in Caspar, and we talked, and that changed my whole perspective. You know, I always considered myself a Civil Rights activist, but for white people. But I kind of liked the idea of being in an organization for all people.

What was the reaction of your fellow Klansmen? It wasn’t good, I’ll tell you that much. One kid got so distraught over it he moved to Tennessee.

If you wanted to hang out with a more diverse group of people, why not just join a different organization?Well, yeah. You got a point there.

What made you drop out?I got tired of the stigma. After all the media stuff, my kids didn’t like being associated with the Klan. To be honest, I wish I’d never joined the Aryan Nations or the Klan. I wish I’d just gone on my merry way, and had a good life.

What’s your life like now?Well, I’m divorced. My son’s 18, and my daughter’s 15. And I’m unemployed at the moment. I have ten or 15 years of experience in the motel business, but it’s gotten harder for me to find work with everything that’s gone on. I’m a known Klan organizer. That’s why I’m doing this Martin Luther King celebration, to regain my reputation in the community.

Now that you’re honoring Dr. King, what do you make of reports that the Klan put a bounty on his life? That’s something that I don’t agree with, and that’s another reason to disassociate from the Klan. I mean, he was not perfect. He was a Communist, he was a womanizer, and he had a lot of personal issues, but I think overall, he was a good man.

Are you supporting anyone in the Presidential primaries? I’m going to vote for Trump. In fact, I’m a volunteer for Trump’s campaign. I told them about my situation when I signed up, and I mentioned the Martin Luther King celebration. They were a little skeptical [laughs].

What kind of work do they have you doing? The had me go to the fairgrounds and get information for the pricing, in case Trump decides to come here. That’s about the only thing I’ve done, so far.

What appeals to you about Trump? He is a great uniter, and he’ll be great for America. He wants to deport all the illegal aliens back to wherever they came from, which I think is really great. I think if people want to come here, they should come through the front door and be upfront about it. And the temporary ban on Muslims—we need to tighten up the vetting process.

A lot of observers have called him a racist. I think that’s a great misunderstanding of who Trump is. He’s the opposite of a racist. He has lots of support in minority communities. He wants to unite people. He doesn’t want to tear people down.

Are you expecting a big turnout for the MLK event compared to the usual attendance at the church? I’m not sure. To be honest, I haven’t been to church in awhile…

The celebration of Dr. Martin Luther King, Jr., will be held at 10 a.m. on January 16 at First United Methodist Church in Great Falls, Wyoming.