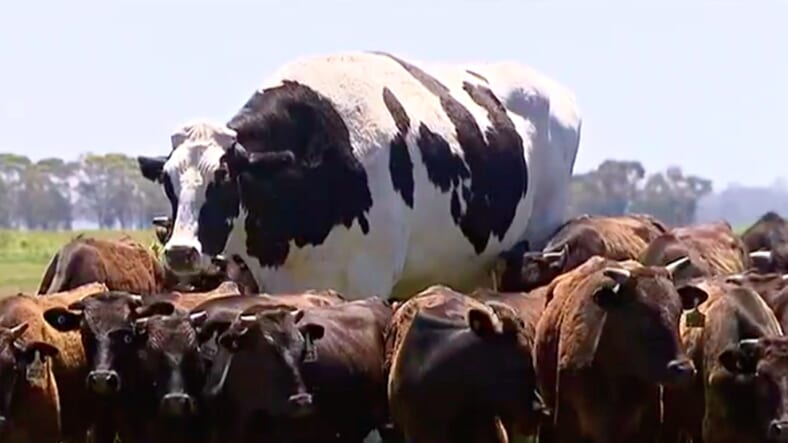 Knickers is a seven-year old Holstein Friesian in Mylup, Western Australia, and for some reason, is twice the size of the rest of the herd. Some are already calling him (yes, he’s a male) the “world’s biggest cow” after his photos went viral.

Normally, Holstein Friesian cows weigh 1,500 pounds and are 4’8″ tall, and the bulls are only slightly larger.

But according to Australian news outlet ABC, this bovine behemoth is “almost as tall as NBA star Michael Jordan and weighs more than a Mini Cooper,” standing at 6’4″ and tipping the scales at a staggering 1.4 tons. That’s udderly absurd.

I could stare at this picture of Knickers the Overgrown Australian Steer all day long.https://t.co/qlwwUhIunY pic.twitter.com/DTBIKPLGeb

The beefy beast’s owner Geoff Pearson told Perth Now that because of his mammoth size, Knickers’ life has been spared because he’s literally too big for the local abattoir.

“It was too heavy,” Pearson explained. “I wouldn’t be able to put it through a processing facility.”

However, if the cow were to face the big chop, it’d produce around 1,400 pounds of beef, with about 450 steaks and 815 pounds of other cuts of meaty goodness.

At 194 centimetres high, WA-born steer Knickers is believed to be the tallest in Australia — and one of the tallest in the world. https://t.co/ZCOZVh124z pic.twitter.com/OAW8JcWozX

Plus, apparently Knickers is something of the Bovine Supreme for the other cows in the herd.

“Whenever he wants to get up and start walking there’s a trail of hundreds of cattle following him,” Pearson says. “You’ll put him in a paddock and all the other cattle seem to get attracted to him.”

And in case you’re wondering where the name Knickers comes from: “When he was young, when we first got him, we had a Brahman steer [a breed of cattle] which was a friend of his,” Pearson explained. “So his name was bra… so we [had] bra and knickers.

“We never thought he would turn into a big knickers.”