The gunman behind the deadliest shooting in modern U.S. history has been identified as a 64-year-old Nevada resident. 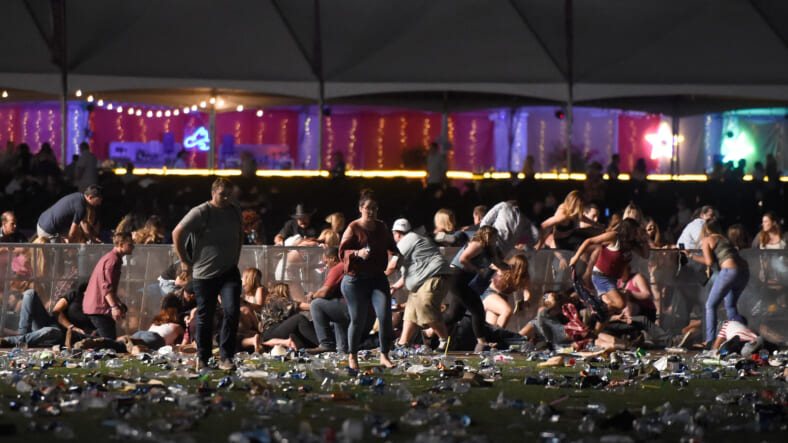 A country music festival on the Las Vegas strip descended into chaos Sunday night after a gunman opened fire on a crowd of thousands from a 32nd floor hotel room nearby, killing 50 and injuring 400 more. The casualty count is expected to rise, but the incident is already the deadliest mass shooting in modern U.S. history.

Shots rang out just after 10 p.m. local time as country singer Jason Aldean was on stage on the last night of performances at the Route 91 Harvest Festival, held in Las Vegas Village.

The initial burst of gunfire was met with confusion. Aldean continued singing and some in the crowd thought they were hearing pyrotechnics go off.

“I thought it was fireworks going off and maybe it mistriggered, and then it happened again. And when it happened the third time, we knew something was wrong,” SiriusXM Country host Storme Warren, who was on the side of the stage at the time, told CNN.

After the initial burst of shooting, the gun man paused and then began firing again, sending the crowd of thousands scurrying in a chaotic scene.

“It was a horror show,” Ivetta Saldana told the Las Vegas Review Journal. Though she initially mistook the pops for fireworks, Saldana said she hid in a sewer once she realized what was really going on.

“People kept dropping and dropping. … People were getting shot one foot away from us,” concertgoer Meghan Kearney told MSNBC. “People were trying to save their friends. There were gunshots everywhere. Helping them would’ve meant that we got shot, too.”

Police were able to find the shooter, identified as 64-year-old Stephen Paddock, after the smoke detector went off in his 32nd floor room at the Mandalay Bay hotel. The hotel is located across the street from where 30,000 were attending the festival.

The shooter fired shots from the 32nd floor at the Mandalay Bay into the concert area. Map rendering by @CBSNews. #LasVegasShooting pic.twitter.com/upR0e3DZtv

After finding Paddock’s room, where he was holed up with as many as 10 guns, police entered and killed the native of Mesquite, Nevada. Police are still investigating a motive for the mass shooting and have told CNN that Paddock does not appear to have a criminal record.

At a late night press conference, Sheriff Joseph Lombardo assured the city, where rumors were swirling about additional threats, that Paddock was the only gunman and that there were no explosives to worry about.

For a time, police were looking for Paddock’s “companion” Marilou Danley, but they found her early Monday and said that she was not involved in the shooting.

No one in Jason Aldean’s band was injured, his spokesperson said. In an Instagram post, Aldean wrote that the incident was “horrific.”

“It hurts my heart that this would happen to anyone who was just coming out to enjoy what should have been a fun night,” he wrote.