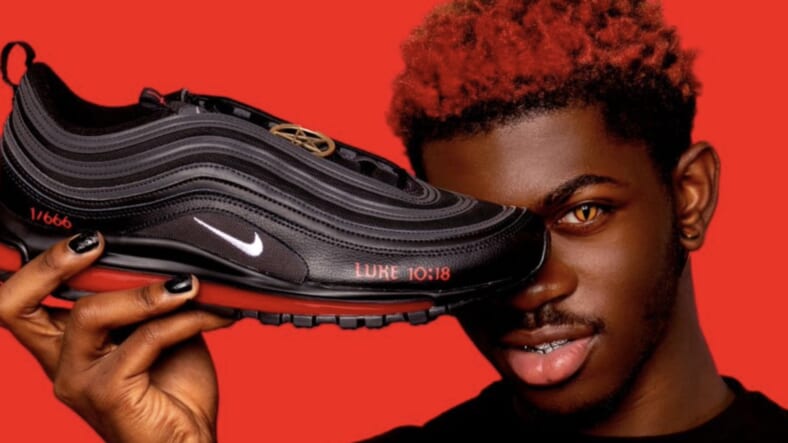 According to the internet, “Old Town Road” hitmaker Lil Nas X needs to go back to church. That’s one take, at least, on Nas promoting “Satan Shoes,” tricked-out pairs of Nike’s Air Max ’97 designed by MSCHF.

Nike has nothing to do with this. The company made that clear in a statement given to the New York Times that they “do not have a relationship with Little Nas X or MSCHF. Nike did not design or release these shoes, and we do not endorse them.”

The Times‘ straight-faced style makes the paper’s description of what’s up with these kicks kind of funny:

The Satan Shoes are a collaboration between MSCHF and the rapper Lil Nas X, following the release of a devil-themed music video for his song “Montero (Call Me by Your Name)” in which he gyrates on Satan’s lap.

In the song, Lil Nas X, who was born Montero Lamar Hill, “cheerfully rejoices in lust as a gay man,” wrote Jon Pareles, the chief music critic for The New York Times.

Lost in many reports is the fact that for MSCHF, the “Satan Shoes” are just a logical followup (apparently) to their “Jesus Shoes,” released in 2019.

As if the obviousness of the design company’s name—pronounced “Mischief”—wasn’t enough, then these tricked-out Air Maxes bearing heavy religious symbolism and references to Bible verses would be all the proof anyone needs that this company is basically using provocative, trolling-style tactics to get attention and advertise their work.

Lil Nas X and Nike, despite its lack of involvement, have received some hard blow-back over these shoes, triggered as much as anything by MSCHF’s claim that a drop of human blood was used to remake the Nikes in the Horned One’s image. People took to social media to air their grievances, jokes, and memes.

My kids will never play Old Town road again.. I’m still debating about wearing @Nike after this come nike a drop of blood for real

If this doesn't make you boycott Nike, you are a very very lost person. #SatanShoes #LILNASX pic.twitter.com/KwousnZhmk

These #SatanShoes by #Nike & #LilNasX with 666 and a drop of human blood in the sole is a reason why we Christians must be prayed up ready to battle in the spirit with the Voice of the Holy Spirit. This is evil & heresy and I pray that Christians rise up against this. pic.twitter.com/u7CK3NCIy7

The real story might be just how hard Lil Nas X came back at his critics. He wasn’t backing off or apologizing for a damn thing and gleefully roasted people in the bargain.

u can’t last 30 seconds in bed with your wife https://t.co/6mFCJlceWb

i literally sing about lean & adultery in old town road. u decided to let your child listen. blame yourself. https://t.co/gYmTi49BqB

His frostiest response was a tweet showing a Nike mocked up with Chick-fil-A colors and another biblical reference. The singer is openly gay so the message was clear, given that Chick-fil-A has been criticized by the LGBTQ community for donating to charities with anti-gay agendas.

we have decided to drop these to even the score. damn y’all happy now? pic.twitter.com/RGpCiiRbGb

“we have decided to drop these to even the score,” Nas tweeted, “damn y’all happy now?”

The people who are happy now are likely the crew at MSCHF. The 666 pairs of $1,018 “Satan Shoes” complete with a metal Pentagram and some actual human blood in the mix reportedly sold out in under a minute.