Man, that’s got to hurt. 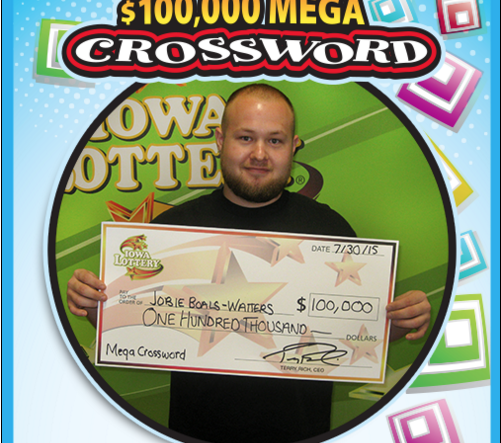 He even got to hold the giant check.

Back in July, Jobie Boals-Watters bought a Mega Crossword instant-scratch ticket at the Super Quick Foods in Des Moines, Iowa. He scratched the card. A regular lotto player who spent hundreds of dollars weekly on tickets, according to local news station KCCI, he probably wasn’t expecting much.

But hey, you never know. And damn if he didn’t win a sweet, sweet hundred grand.

There’s just one problem. As it happens, Jobie is 20 years old. The legal gambling age in Iowa is 21. So Boals-Watters did what pretty much anyone in his situation would do: He said a coworker bought the ticket for him.

The Iowa Lottery thought that sounded fine. They took his picture holding a giant check for $100,000 and tweeted it out. “This #DesMoines man has 100K reasons to celebrate today after winning a BIG prize!” they wrote. Their Facebook post even carried the hashtag “#woohoo!”

This #DesMoines man has 100K reasons to celebrate today after winning a BIG prize! Congrats to Jobie Boals-Watters! pic.twitter.com/bjqREgZAYI

Perhaps it should have been #boohoo. Not long after, an anonymous tipster came forward and dropped a dime on Jobie. The Iowa Lottery decided to investigate further. They pulled the security cam footage from the Quick Foods, and there he was. Busted.

The Quick Foods caught some heat, too — a possible one-week suspension of their license to sell tickets. That’s right, a whole week of not selling any tickets whatsoever. After both they and the lottery commission fleeced this kid for maybe thousands of bucks. LOL.

We reached out to Boals-Watters to commiserate, but weren’t able to contact him. Jobie, if you’re reading this, dude, that sucks. And to the rat fink narc who ruined Christmas, all we can say is, Why, bro? Why?