It’s mind-expanding influence is quite a trip. 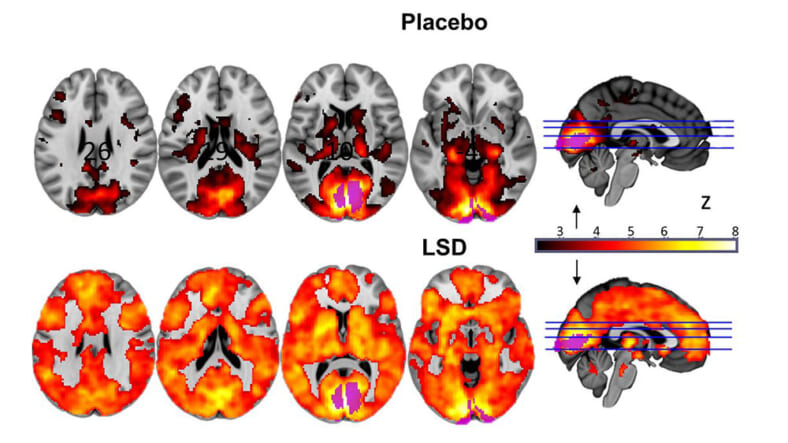 In a first, researchers have revealed a close study of what happens in the brain of someone who is tripping on LSD. What they found was remarkable, if not necessarily surprising to anyone who’s had direct experience with Dr. Hofmann’s discovery. According to a Guardian report on the research, on some level it’s almost as if the potent hallucinogen attempts to super-power a user’s brain.

A dose of the psychedelic substance – injected rather than dropped – unleashed a wave of changes that altered activity and connectivity across the brain. This has led scientists to new theories of visual hallucinations and the sense of oneness with the universe some users report.The brain scans revealed that trippers experienced images through information drawn from many parts of their brains, and not just the visual cortex at the back of the head that normally processes visual information. Under the drug, regions once segregated spoke to one another.

A neuropsychopharmacology professor from London’s Imperial College did not mince words about what he felt the research revealed regarding just how powerful LSD could be. David Nutt told the Guardian that the research teams’ discoveries were “to neuroscience what the Higgs boson was to particle physics” and they did not “know how these profound effects were produced.”

LSD was used in a great deal of research after its discovery in the late 1930s, and it significantly influenced the related fields of psychology and psychiatry. Then it was banned in the western world in the 1960s, ending active investigation. The study reported on in the Guardian was a crowdfunded effort under the auspices of the Beckley Foundation, an organization interested in carefully-considered reforms of government drug policies.

In the study 20 “physically and mentally healthy” subjects volunteered to be injected with either a dose of acid or a placebo. Then Nutt and his associate Robin Carhart-Harris did detailed brain scans tracking blood flow within the brain as well as brain activity.

Carhart-Harris told the Guardian that their discoveries indicated in many patients that LSD produced in some ways a “more unified brain” even while in other regions it dismantled existing associations.

The general takeaway — at least according to the Beckley Foundation — is the scans ably illustrated LSD’s therapeutic potential in a way research wasn’t able to do in the 1950s and early 60s. David Nutt indicated to the Guardian that what they found was solid evidence of the drug’s potential to help treat addiction or depression by resetting or re-directing various thought patterns.

It seems clear that longer-term and more thorough research is needed when dealing with a drug as potent as LSD. However it’s hard to not be a little optimistic at the thought of one day spending a weekend tripping in a therapeutic setting and coming out the other side less likely to have one too many drinks or spend weeks depressed and in bed.

Who knew that hippies tripping in the mud at Woodstock might have been onto something, after all?