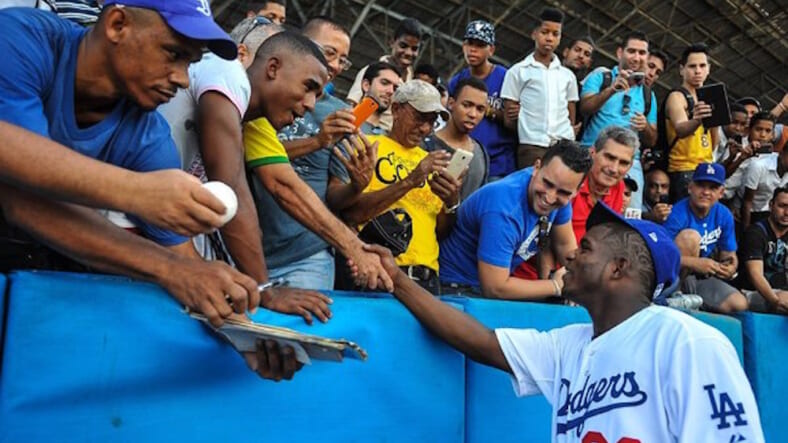 The United States’ 64-year-old embargo of Cuba has affected the island nation in countless ways, many of which have, until now, remained hidden to most Americans. One that hasn’t escaped the public eye, though, are the stiff challenges that Cuban baseball players face: either leave Cuba behind to take a swing at the big leagues, or stay and play ball in Cuba for a pittance.

All that could change if the MLB has its way. According to the New York Times, the League has submitted a proposal to the Treasury Department that would allow Cuban ball players like L.A. Dodgers star Yasiel Puig to sign directly with MLB teams—with the blessings of the Cuban government and the Cuban baseball apparatus, no less.

The plan, the MLB’s top lawyer told the Times, involves the creation of nonprofit-like entity in Cuba made up of Cuban baseball officials, players’ union representatives, and entrepreneurs. A percentage of Cuban-born MLB players’ salaries would fund the organization, which would set up and foster youth baseball, train players, and upgrade the country’s sporting facilities.

Because no money would exchange hands for profit, the current embargo could satisfy the requirements of the U.S. embargo. The enforcement agency, Office of Foreign Assets Control, has yet to confirm or deny whether the plan would be legal. Only Congress can dismantle the embargo completely.

The situation is, in fact, urgent. According to OnCuba, a Miami-based magazine, 150 players left Cuba last year. Their odyssey from Cuba to the States is often fraught with dangers as they travel to intermediary nations in order to satisfy the current MLB requirement that they establish citizenship in a third-party country before being considered for U.S. player visas.

Remarkably, the way forward looks promising. Both U.S. and Cuban officials have expressed support for a new level of cooperation between the two countries regarding baseball and other joint ventures.

Perhaps in anticipation of President Obama’s upcoming trip to Havana on March 21, the White House has been directly involved in the plan’s formulation, talking to MLB officials behind the scenes to come up with the best strategies for dealing with such tricky legal issues as the embargo and the human trafficking laws that govern the international “smuggling” of players by third-party agents. During his visit, Obama is expected to attend a game between the Tampa Bay Rays and the Cuban national baseball team.Cuban officials have openly expressed their support as well. “To play in that type of baseball in the United States, where the majority of the greatest players in the world want to be, you need to give up something big here, your dignity of being Cuban,” said Higinio Velez, the president of the Cuban Baseball Federation, in December.

“We hope that, in the future, Cuban players can go anywhere in the world and play, representing their federation, and that there are not intermediaries that take advantage of them,” he continued.

We can’t wait to see what happens.