Do NOT mess with this guy. 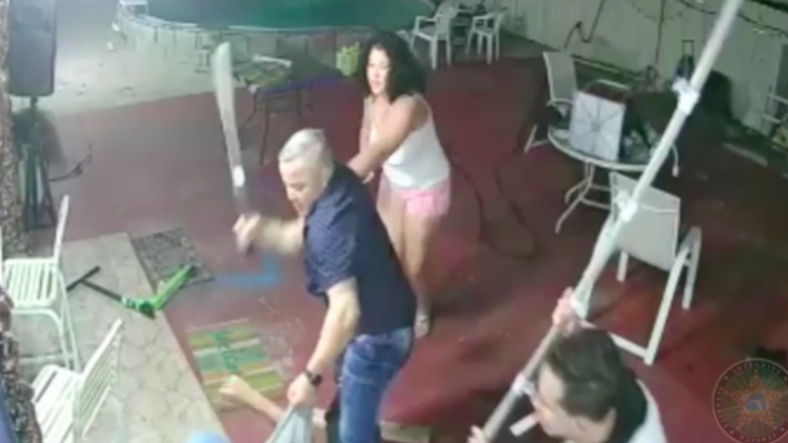 A fearless South Florida man exhibited a seriously badass display of courage when he fended off five armed robbers with a machete. ABC News has further details:

According to the Sarasota County Sheriff’s Office, on early Thursday morning, a homeowner was able to disarm an alleged robber by using a machete and hold the suspect until deputies could arrive on the scene.

As seen in the video, three men — armed with a crowbar, a machete and a shotgun — entered the victim’s porch in Sarasota, Florida, with the apparent intent to rob the homeowner.

From the very beginning of the clip, you can see the man, who’s wearing a blue shirt, immediately go into “fight” mode as he wields a 2×4.

After the three men approach, one armed with a shotgun, the man retreats into the house momentarily before he returns brandishing a machete.

Two alleged assailants can be seen jumping the fence in the surveillance footage before the machete-wielding man apprehends one suspect and appears to recover the shotgun.

The four other assailants were found in the same car at a nearby gas station.

Authorities say the victim said two other alleged assailants were on the scene during the armed robbery, but they fled before deputies got there.

The Sarasota County Sheriff’s deputies were able to get a description of the suspects’ vehicle and located it at a gas station nearby. Inside the car, deputies said they found “four men wearing dark clothing … one of whom was carrying several zip ties.”

Once all five men were under arrest, deputies said two of the suspects admitted to attempting the armed robbery.

Amazingly, no one was injured. The five suspects face charges that include armed robbery and possession of a firearm by a convicted felon. Further charges may be filed, as the investigation is ongoing.

Meanwhile, the victim has earned a nomination for badass of the year.