Man Mauled to Death While Trying to Take Selfie With Bear

Watch what happens when a bear doesn’t feel like posing for a selfie. 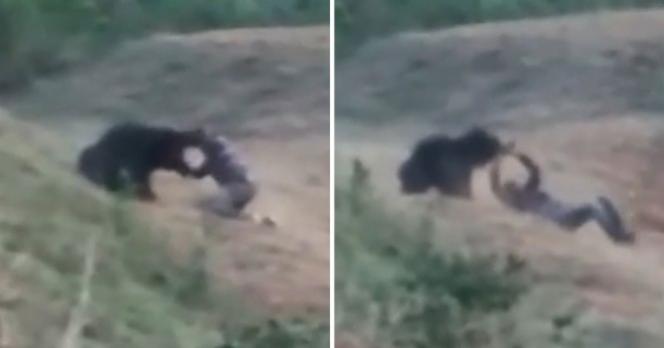 An Indian man tried to snap a selfie with a wounded bear and paid the ultimate price.

Bystanders traveling with Prabhu Bhatara stood by helplessly and recorded the terrifying final moments he spent in the apex predator’s lethal grip. Watch the harrowing video above.

Bhatara, who was returning to Papadahandi with a few others in an SUV from Kotapad where they had gone to attend a wedding, had stopped near a forest to attend nature’s call. He then spotted an injured bear and decided to click a selfie with the wild animal.Although the others in the vehicle cautioned him against doing so, Bhatara came perilously close to the bear which chased him and fatally mauled him.

A stray dog tried to aid Bhatara by barking at the bear to no avail.

“Bhatara died on the spot,” forest ranger Dhanurjaya Mohapatra said. “The bear is being treated for its injuries.”

This the third time that the Indian state of Odisha has seen a seflie-related fatality in just five months.

A 50-year-old man was crushed to by a wild bull elephant’s trunk while trying pose for a photo with the animal last December. That same month, another man was trampled to death by an elephant after sneaking into the Khamar forest range to snap selfies.

Maybe don’t do anything for the ‘gram, unless you’re as lucky as the 20-year-old Colorado resident who’s already survived bites from a shark, bear and rattlesnake.