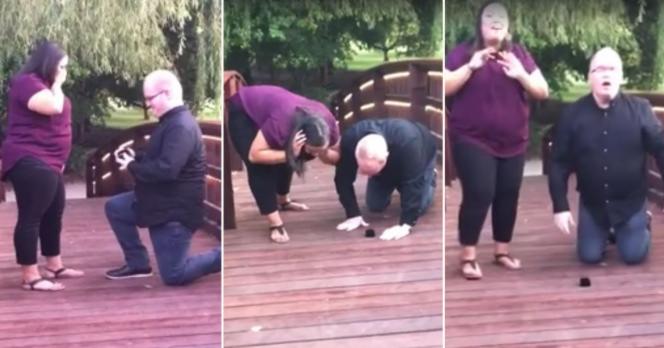 Stuff happens, but losing an engagement ring before you get a chance to see it on your fiancee’s finger is really shitty.

That’s what happened to hapless Missouri man Seth Dixon in the cringe-worthy video above. His heart-warming proposal to Ruth Salas went awry when his $3000 diamond engagement ring fell through the slats of a bridge moments after he took a knee to pop the question.

To be fair to Dixon, it doesn’t look like he actually touched the ring. It flew out of the box as soon as he opened the lid. Still, this belongs in the “epic fail” category.

Dixon and Salas assured readers of the Kansas City Star that the clip is 100 percent genuine.

“We freaked out,” Salas added. “It ping-ponged from one plank to another. You could hear a little plop.”

Maddie Villareal, a friend of the couple, stayed with them and waded through the muddy waters beneath the bridge searching for the ring until nightfall.

By the end of the week, metal detectors and a volunteer search party consisting of members from Salas and Dixon’s church had all been employed in the search effort. They found nothing.

“We probably had 25 people there. I think we had like 12 people in the water all at once,” said wedding photographer Staci Dabney, who attends church with the couple.

The video went viral, amassing 115,000 views in three days. A Go Fund Me campaign to raise money a replacement ring has already been completed.

On the bright side, it’s probably one of the most memorable proposals of all time.

Plus, she ultimately said yes—their wedding is scheduled for October 21.