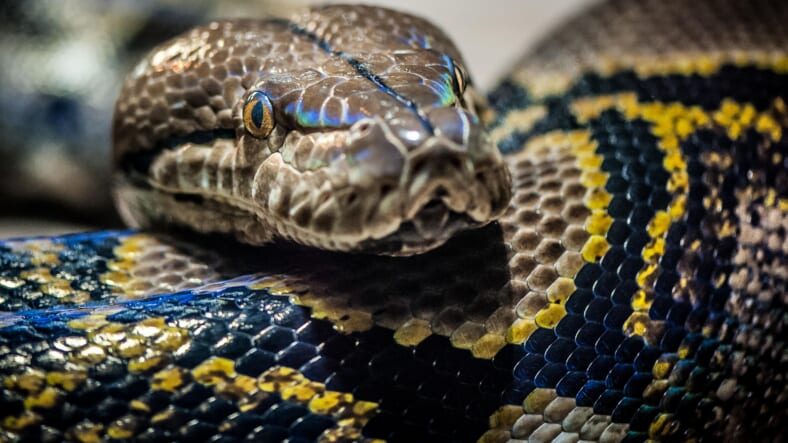 Now this is the stuff nightmares are made of.

Villagers on the Indonesian island of Sulawesi watched in horror as the body of a local farmer was pulled out of a 23-foot-long python that had swallowed him whole.

An absolutely cringe-inducing video of a villager cutting into the giant snake’s carcass to reveal the dead man has been circulating around the web, which you can watch above if you dare.

Village Secretary Salubiro Junaedi told the Associated Press that villagers had been searching for the 25-year-old farmer, named Akbar, after he failed to return from his family’s palm fruit plantation.

The search party didn’t find Akbar, but instead discovered the suspiciously engorged serpent nearby. And that’s when things got truly weird.

West Sulawesi police spokesperson Mashura explained what happened next to the BBC:

“They didn’t find him, but the villagers saw an unmoving python in the ditch. They grew suspicious that maybe the snake had Akbar. When they cut it open, Akbar was inside the snake,” said Mashura, who like many Indonesians goes by one name.

Junaidi also told The Jakarta Post: “People had heard cries from the palm grove the night before Akbar was found in the snake’s stomach. When the snake was captured, the boots Akbar was wearing were clearly visible in the stomach of the snake.”

The Reticulated Python is the longest snake the world and has been known to prey on boars and monkeys in the wild by squeezing them to death and then eating them. Python attacks on humans are extremely rare, though apparently all it takes for one spectacular snake attack to make for a helluva viral video.

While they normally avoid human settlements, this particular python may have been attracted to the palm fruit plantation because of the opportunity to hunt other animals attracted to the area.

But any which way you slice it, it’s still freaky as hell.