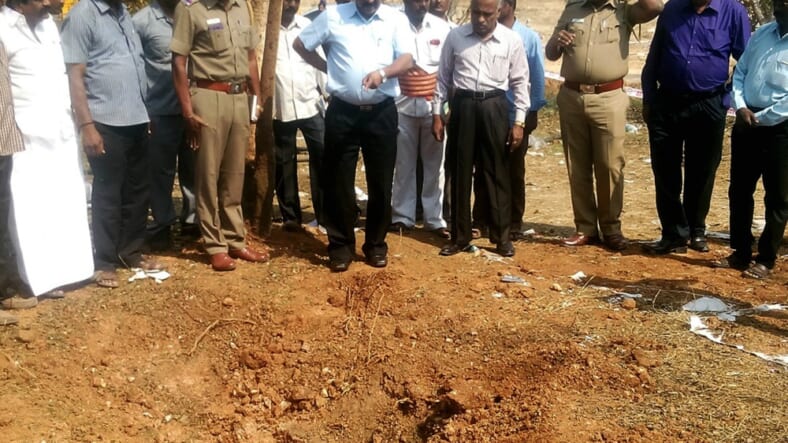 Indian authorities are investigating the death of a man on a college campus this weekend in what appears to be the first case of a meteorite fatality in nearly two centuries, the Washington Post reports.A blast on the Bharathidasan Engineering College campus reportedly “left a crater in the ground and blew out glass windows in nearby buildings,” according to the Post, killing a bus driver and injuring several other employees and students.

“There was a noise like a big explosion,” college principal G. Baskar told The Wall Street Journal. “It was an abnormal sound that could be heard til at least 3 kilometers away.”The region’s chief minister, Jayalalithaa Jayaram, later confirmed that “a meteorite fell within the college premises.”

Crater formed due to meteor impact at Nattrampalli, vellore. looks like a powerful impact. pic.twitter.com/POlim224pn

Piece of a meteorite found at a private engineering college in Vellore. One person was dead in the explosion. pic.twitter.com/TON5qzIw7N

The bus driver, referred to in the Indian press as V. Kamaraj, was severely injured by flying glass when the meteor exploded on impact. He later died on the way to the hospital.

Scientists are still working to confirm whether Kamaraj was in fact killed by a meteor. “When no evidence of explosive material was found, we moved to the theory that it might be a meteorite,” a district official told Reuters. “It is not confirmed yet as samples need to be analyzed.”In a statement, Minister Jayaram referred to Kamaraj’s death as a “mishap.” Her regional government has paid the bus driver’s family a  paltry sum of $1,471 in compensation.While many headlines call this incident the first meteorite fatality in “recorded history,” that’s actually debatable. The last recorded death by meteorite occurred in 1825, according to International Comet Quarterly. That death also occurred in India.