Probably not the smartest idea. 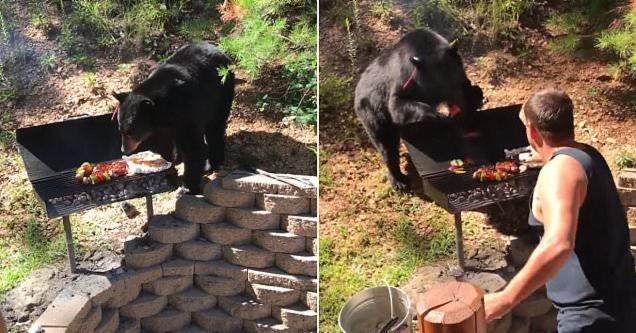 Video has surfaced of one of most bizarre animal confrontations we’ve ever seen that shows a fearless—or maybe just plain crazy—man going toe to toe with a hungry black bear to protect about $30 worth of steak and shrimp.

Despite screams of protest from the his wife and children, the father valiantly defends their meaty meal by spraying the hungry intruder with beer. At one point, he futilely attempts to scare it away by slapping a pair of tongs near its paws.

Ultimately, it was a flame-up on the grill that deterred the beast, but not before the majestic animal made away with a juicy steak.

As far as bear encounters go, this was the tamest we’ve seen in while. Earlier this year, an overzealous bow hunter foraging the Canadian wilderness filmed the moment a black bear charged and knocked him on his ass.

But a 50-year-old Montana man takes the cake for the craziest bear confrontation.

While on a solo hike through the wilderness, Todd Orr basically lived through a real-life version of the grizzly attack scene from The Revenant when he was mauled, thrown and bitten by a protective mother… twice.

Watch the bruised-and-bloodied man recount the harrowing experience moments after making back to safety below:

Play it safe and don’t fuck with bears, people.