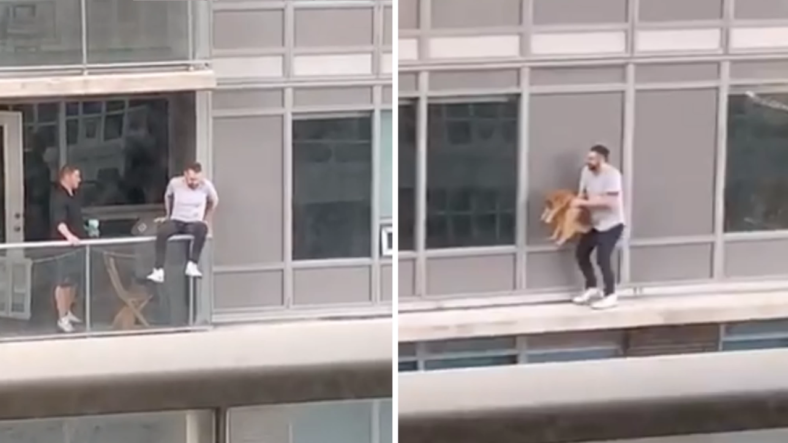 Of all the people in the world, there are three types of individuals. Those who dislike cats, those who love them…and then there are a few select people who would literally die for cats.

An unidentified man in Toronto is of the latter, perilously walking across the ledge of his 6th floor high-rise apartment building between his and a neighbor’s balcony to save his furry friend.

The person who recorded the video summed up what everyone else is feeling about the whole thing in his narrative: “No. Noooo. No…noooo. What the fuck is he doing?”

The man’s cat somehow made his way to the neighbor’s balcony and couldn’t find his way back, so to save it from accidentally falling to its death he climbed over the railing, walked across a narrow ledge between the balconies, grabbed his cat and walked right back without flinching.

It would have been a thousand times easier and safer to just knock on the neighbor’s door, but unfortunately they weren’t home.

“He was trying to squeeze back under the glass and getting stuck almost, I was afraid he was going to hurt himself,” he told Blog TO. “He would likely have fallen if he’d tried to hop back over. I had to do something quick.”

When asked if he was scared shitless when he was scaling the building, he reportedly just shrugged and said: “I just wanted to get him back.”

While this was a pretty heroic thing to do for a cat, it’s also arguably insane. This guy risked his life for a cat…but he just probably didn’t get the memo that cats have nine lives and he only has one.