Nightmare Explosion Sucks Passenger Out of Plane in Mid-Air

Just in case you were thinking of flying the Somali skies. 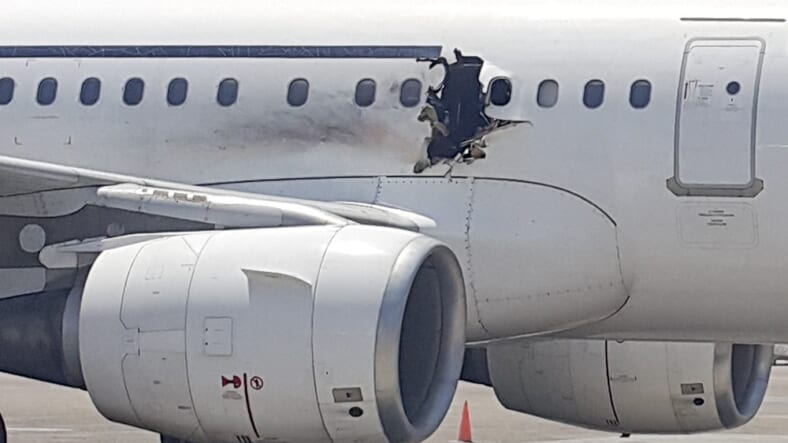 Update, 2/4/2016, 9:45 AM: Citing “a source with knowledge of the investigation,” CNN reported that the explosion on board Daallo Airlines Flight D3159 was caused by an explosive device. Somali authorities were noncommittal, one official saying there was “a lot of conflicting information,” but CNN’s source said early tests did indeed find traces of “explosive residue.”

Original post: Daallo Airlines Airbus A321 had taken off from the Somali capitol of Mogadishu Tuesday and was at 10,000 feet and climbing when an explosion punched a hole in the plane’s fuselage. In a nightmare scenario for anyone who has ever traveled by plane, one passenger was apparently sucked through the hole.

The Sydney Morning Herald reported the man was later found some distance from Mogadishu airport:

Local authorities in the Balcad area, about 30 kilometres north of Mogadishu, confirmed the body of the man, believed to have been sucked out of the plane, was found in the area.A police officer at Mogadishu airport said, “The dead body of the passenger is being transported to Mogadishu.” The officer, who asked not to be named, told Reuters that the man was about 55 years old.

Remarkably, the Daallo Airlines jet was able to return to the airport, the remaining 70-plus passengers none the worse for wear.

Wednesday the cause of the explosion was still unclear. Passenger Mohamed Ali said he didn’t “know if it was a bomb or an electric shock, but we heard a bang inside the plane.”

As the Sydney paper noted, Somalia has been doing battle with al-Shabaab Islamic extremists for years. The extremists have sponsored suicide bomb attacks as recently as 2014.

The hero of the near-disaster was undoubtedly Serbian-born pilot Vlatko Vodopivec.

Vodopivec—who told the Associated Press he was informed the explosion was indeed from a bomb—kept his cool and turned the plane around.

Though Vodopivec modestly noted that no critical systems were damaged so landing was routine, diplomat Awale Kullane was on board and said he and others were completely “terrified” at first, but he had to “give credit to the pilot who landed that plane.”