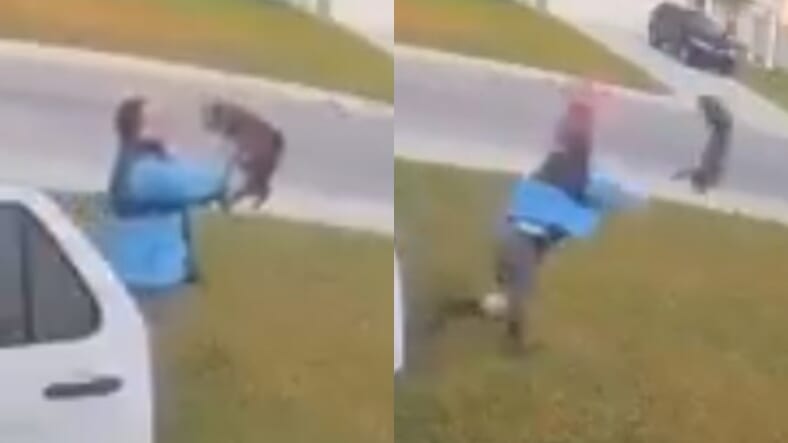 A chaotic viral clip of a man throwing an attacking bobcat has been viewed millions of times across social media platforms. Twitter user Sada casually described the panicked scene as a “wild 46 seconds,” a caption that caught the attention of nearly 7.5 million viewers and counting.

This was a wild 46 seconds pic.twitter.com/jIHQg0G4qU

As Newsweek notes, the video begins with an unidentified man walking to his car in what appears to be a typical suburban neighborhood. He says “good morning” to a passing jogger. Seconds later, a bobcat sprints into frame and towards the car.

The man’s wife briefly appears before she’s immediately attacked from behind. She and the ferocious feline exchange shrieks, and she frantically yells, “Oh my god! Run, Happy, run!” leading many to believe the man’s nickname is “Happy.”

Rather than running, the husband pulls the bobcat off his wife and throws it onto the grass. But the creature then runs back toward the family, at which point the man pulls out a concealed pistol and yells, “Watch out, I’ll shoot that f**cker!”

Multiple outlets report that the video was originally posted to TikTok, where it amassed at least 5 million views before it was removed for violating the platform’s anti-violence policy.

Many believe the animal was rabid. Internet sleuths have linked the incident to the following statement from the Pender County, North Carolina Sheriff’s Office, which seems to corroborate that theory:

The guy TikTok page got taken down cause of the video but, happy and his wife is okay they got they’re rabies shots and happy ended up killing the bobcat. If anyone wanted an update!!

“There has been a positive case of rabies discovered in your neighborhood. On April 9, 2021, a bobcat was killed in the area around Creekside Subdivision in Burgaw. It was submitted for testing at the NC State Laboratory and our department has been notified this bobcat was positive for rabies.”

Fortunately, another Twitter user who claims to be familiar with the family said they’re alive, well, and vaccinated for rabies, according to the New York Post.