The French stunner’s striking photos are winning her fans the world over. 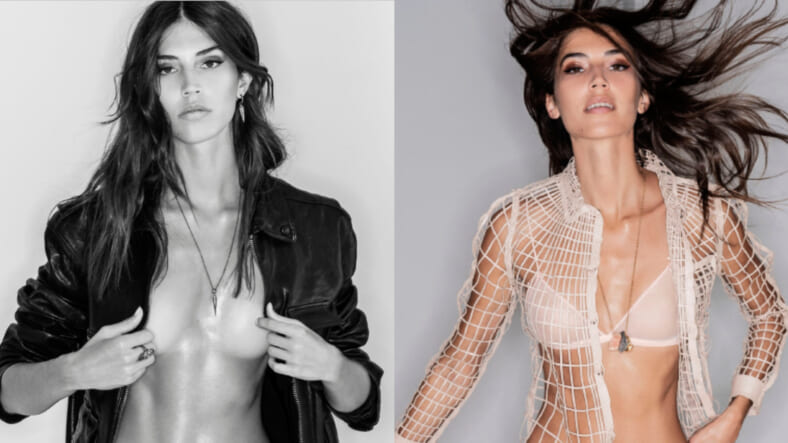 Léa “Marilhéa” Peillard puts her fingertips on the frame of the monitor and turns her head gracefully towards photographer Gilles Bensimon. She is dressed in thigh-high boots and a black miniskirt. He is wearing white corduroy trousers, a light blue shirt and a colorful scarf tied around his neck. Barefoot, with the camera in his hands, he directs the French model. The location is a photo studio reached from a small courtyard in Paris’s chic 7th arrondissement—a few minutes’ walk from the Eiffel Tower. This day in June the temperature has reached nearly 90 degrees, and inside the studio the fan is blowing.

“Gilles works fast and knows what he wants. I follow him on Instagram and he is a big name in the industry; so it feels awesome to have been photographed by him, especially for the cover of a major American magazine like Maxim,” says Léa after the shoot. From Gilles, she got the same question that has followed her throughout her seven-year modeling career: “What are your origins?” Her long dark hair and tanned skin make one think of southern latitudes.

“I’ve been told by people that they think I come from everywhere from Brazil and Italy to Portugal, Egypt and Morocco,” Léa laughs. “It’s pretty funny because I’m 100-percent French; I come from Dienville, a small village in northwestern France. But for me, it is only positive that I am taken for several different nationalities. It gives me a bigger palette to work with.”

The fashion industry seemed a world away during her upbringing. Léa and her two younger brothers were raised by a father who worked as a farmer and a mother who worked in daycare. In her teens, however, her friends insisted that she should try modeling, and her parents too thought it could be a fun experience for her. But Léa herself did not feel particularly attracted to the idea. “I was very shy and did not see myself working as a model,” she recounts. “It felt stressful and I was scared to be judged.”

Her passion was drawing, and when she was 17 she moved to Dijon and started studying art history. One evening, a few weeks into the course, a friend called and told her that another friend who had seen Léa said that she was made to be a model. For some reason, that phone call got her thinking. She looked up dates to sign up for the Elite Model Look competition, and saw that the last chance for casting was just a few days away. “I would soon turn 18 and something in me said I would regret it if I didn’t give this a chance,” she recalls.

Léa went to Paris with her father and was selected for the competition. A few weeks later she had won the Elite contest in France and continued to the international finals which took place in Shanghai. She won that too. Within a few months, she had gone from not having any serious thoughts of working as a model, to having the winning title to one of the world’s leading modeling competitions.

“I never expected anything like that,” she tells us. “It was a huge deal both for me and my family. The fashion world had been so far away from my reality. I have always been interested in clothes and liked to shop with my mom. But when I won Elite, I hardly knew the name of any fashion designer except for maybe Jean Paul Gaultier and Isabel Marant. I didn’t even know what Fashion Week was.”

It was after winning the competition in France that the Elite Paris agency, which had signed her, came up with the stage name Marilhéa. The name stuck when she signed with the agency The Society in New York after the international finals. In January 2013, just 18 years old, she crossed the Atlantic and truly started her path as a model. For the first year and a half, she lived in one of the agency’s model apartments; ten girls from different cultures sharing three bedrooms.

“It was cool in a way but also intense because the talk was always about work,” she says. “For some girls it went super well from the start and they were booked for all the big fashion shows. For me, it went slower and I sometimes doubted if I had chosen right. I was told that I was not skinny enough for Fashion Week and I couldn’t really show my personality because my English was not good enough.”

Now, she says, “When I talk to young girls who have doubts at the beginning of their careers I always tell them not to lose hope. It is important to have the confidence to dare to say if you are not prepared to lose five kilos in order to get a certain job. There are lots of other jobs in the fashion world that you can do instead. I am proof of that. Today I am 25 years old and have much more work now than I had when I was 18. I am comfortable in my own skin and I love to eat; it would make me unlucky to starve myself.”

Italian cuisine is her favorite, “but I basically eat everything,” she says. “I like to cook things like quiches and crêpes. It’s an interest that I share with my boyfriend, who is also a model. He is of Algerian origin so he has taught me some things from there, including how to make really good mint tea.”

During her first years in New York Léa worked for Saks Fifth Avenue, Maybelline and Victoria’s Secret, among others. In the fall of 2015, she spent a few months in Paris. There she met her current boyfriend, went on castings and got new, European clients. She was also offered a small role in director Luc Besson’s film Valerian and the City of a Thousand Planets. Prior to filming she took a few acting classes.

“I had a total of 20 days of filming in the spring of 2016, but I couldn’t leave Europe for six months because I needed to be near the studio in Paris,” she notes. “It made me start working more here, and since then my career has really changed; today I work everywhere in the world and more rarely in New York.”

The transition wasn’t entirely seamless. “Many people think that acting is easy for a model who is used to moving in front of the camera,” Léa says. “But they are two completely different things, and I really admire actors for their ability to express themselves with their voices. For me, it was an exciting experience and I’m glad I tried—but it was really challenging. I am quite reserved as a person and find it difficult to act in a way that is not close to my nature. For example, I am not a big party girl, so jumping on a dance floor would be difficult for me. I would rather be the one sitting on a terrace with a glass of wine.”

She feels happy about having moved her base to Paris, but there are still things about New York that she misses. “I like that people are so openminded in New York and not so judgmental,” she says. “There you can almost go out in pajamas without anyone caring. At the same time, I found it difficult to make close friends in New York and there is a somewhat ‘fake’ side. Here in Paris, it is more important how you dress and how you speak. But I have dreamed of living here since I was a kid. And for me, it’s important to be close to my family; now they are only an hour-and-a-half away by train. Here I also have friends who knew me from the time before I started working as a model. It gives me a better balance between leisure and work…. Ever since I started working as a model I have saved my money with the goal of one day being able to buy an apartment in Paris.”

This year she made her debut at Paris Fashion Week with a show for Balmain, followed quickly by the lockdown brought on by the COVID-19 pandemic. She spent the time with her family. “For me, it was a pleasant and much needed period,” she relates. “I was lucky enough to be in the countryside with my parents and brothers. It felt a bit like when we were little. Sure, it was awful with this disease that took so many lives. But I tried to see it as a chance for recovery. I spent time in the garden and in the fields. Even though it was a lockdown, I felt a great deal of freedom and I could really rest. Normally I’m on the move all the time. It was nice to suddenly not be able to fly. I cooked a lot with my mom and went for evening walks with my parents’ dog and watched the sunset.”

Now that things are returning to normal, Léa is looking forward to the next phase of her career. “It would, of course, be huge to do a shoot for Vogue Paris and a campaign for a fashion house like Chanel. But I don’t put so much pressure on myself,” she says. “I like to see what shows up along the way. In retrospect, I have already had several dreams come true, such as the campaign I did for Eres [lingerie], when I was shot for Lui France and made the cover of Elle France. And now the cover shoot for Maxim with Gilles Bensimon—something I had never imagined a week before. It’s really interesting in this industry–a single phone call from your agent can mean a big turn in your career.”