“No matter your circumstances, veterans can still stay in the fight.” 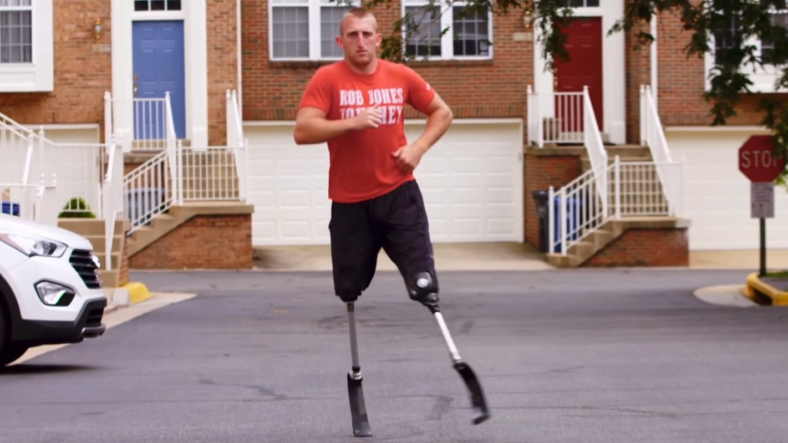 In October of last year, Marine Corps veteran Rob Jones took on an awe-inspiring physical feat: a month-long journey to run 31 marathons in 31 cities across the U.K., U.S. and Canada.

That’s a monumental challenge for anyone. But Jones is a former combat engineer who lost his legs while fighting the Taliban in 2010.

“During my deployment to Afghanistan while operating as a part of a push into Taliban territory, I was tasked with clearing an area with a high likelihood of containing an IED,” he explains on his website. “It was in this capacity that I was wounded in action by a land mine.”

As a double amputee, Jones had to relearn how to ride a bicycle, run and row. He naturally took to the latter, and began training to compete in the 2012 Paralympics. The 32-year-old athlete and his partner, Oksana Masters, took home the bronze in their rowing event.

His next endeavor was a 181-day bike tour that spanned a distance of 5,180 miles from Maine to California. Jones and his team raised $126,000 for three wounded veterans charities over the course of the ride.

The 31-marathon tour was his most recent—and grueling—endurance test yet. Runner’s World has more on the specifics of Jones’ journey:

He enlisted friend Colin Kubarych, who did most of the driving; his mom, Carol Wire, who prepared his meals; and his wife, Pamela Relph, who did just about everything else.

Jones never ran a sanctioned marathon. Instead, he did loops in city parks or out-and-backs on trails. Starting at 7 a.m. each day, he broke his mileage into four intervals with 20-minute breaks in between, averaging 3 hours and 52 minutes of running a day. The rest of his time was spent eating—upwards of 4,000 daily calories —and resting.

The unrelenting spirit instilled in him during his time in the Marines no doubt helped him complete his 31st run on Veteran’s Day of 2017. All in all, Jones raised $200,000 for wounded vets.

“I wanted my life to be something that made a difference in the world,” Jones said in the above video produced by the Marines.

“I did all of that to show that no matter your circumstances, veterans can stay in the fight.”

We can’t wait to see what he does next.