And a thousand memes were born. 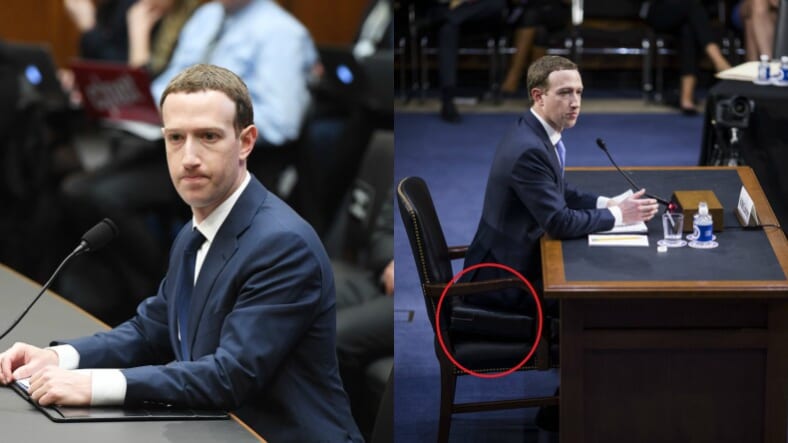 Mark Zuckerberg made an absurd amount of money while getting grilled by Congress for ten hours.

The Facebook CEO fielded nearly 600 questions regarding his company’s most controversial issues in hearings held in the Senate and the House this week.

During that time, both Zuckerberg’s net worth and the company’s stock increased dramatically.

All told, Facebook’s stock has gained about 4.5% since the start of trading Tuesday morning.So Zuckerberg, who owns more than 401.4 million shares in Facebook, got nearly $3 billion richer in the past few days. His stake in the company is now worth around $66 billion.The company’s total market value has increased by nearly $23 billion since Tuesday morning.

It only makes sense that the inventor of the most influential social media platform ever would generate a viral meme. Unfortunately for Zuck, the internet has fixated on the “booster seat” the vertically challenged tech mogul sat on during his Capitol Hill appearance.

ZUCKERBERG TESTIFYING IN FRONT OF CONGRESS FROM A BOOSTER SEAT???? FAM!!!!! https://t.co/jONH1kTLlB

I might not be a billionaire, I might not own a massive business. But, I can say, that if I ever have to face a US Senate inquiry, I won't need a booster seat to sit at the big boy table. #ZUCKERBURG #5foot7 #boosterseat pic.twitter.com/qduXKM6uz7

Another widely circulated image mocked at Zuckerberg’s robotic demeanor by depicting him as Data, the dorky android from Star Trek: The Next Generation.

Lt. Commander Zuck in court after his plan to study humans in greater detail backfires from r/pics

When you know that you have enough information to destroy everyone questioning you pic.twitter.com/XqHk4Re0yI

When you're trying really hard to look like a real person and not a robot. pic.twitter.com/x5NVmg6NUI

Don’t feel too bad for him—being the “butt” of the internet is definitely worth $3 billion.