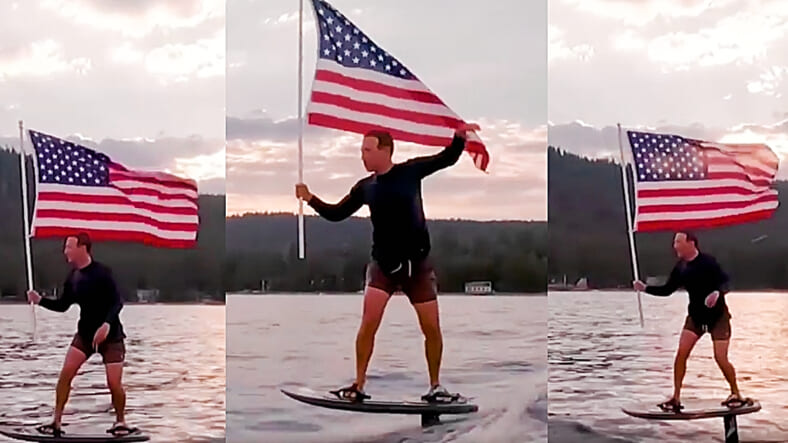 On July 4th, Mark Zuckerberg posted a video of himself speeding across a body of water somewhere on an electric surfboard, waving an American flag. His soundtrack: John Denver’s “Take Me Home, Country Roads.”

Since merely catching audio of Zuck burping out loud or disrespecting Nickelback could cause an online firestorm, naturally, this dramatic (or silly, depending on your point of view) gesture prompted reactions across the political spectrum.

One thing is certain: the Internet had something to say about it.

The Facebook Founder took his patriotic ride on a $12,000 eFoil surfboard. It’s sold by Lift Foils and the company says the electric boards use “an advanced lithium-ion battery to power a silent electric motor that’s mounted on an all-carbon-fiber hydrofoil.” eFoils are customizable and can provide up to two hours of riding time at a maximum speed of 30mph.

Zuckerberg has been seen with a similar board before, when he was photographed in Hawaii with it, his face caked with a suffocating amount of sunscreen.

Online reactions had little to do with Zuck’s futuristic ride. While he may have thought he was simply putting out a patriotic message with some cool video, others found it strange and cringe-inducing. And yes, some even found it kind of fun.

Let’s dip our toes in that piranha-filled cesspool known as Twitter for some commentary:

how Mark Zuckerberg should have celebrated the 4th of July pic.twitter.com/F2eNQcrKqS

Mark Zuckerberg posted a video of himself on Instagram wakeboarding while holding an American flag and set to the music of the late John Denver singing “Take Me Home, Country Roads.”

I saw it, so now you have to see it too. I’m sorry. I did not make the rules.

Tonight Zuck is gonna do a 5 hour FB Live as he bbqs a spear-killed wild boar slathered in none other than Sweet Baby Rays.

I wish they could bring John Denver back to life just so he could sue Mark Zuckerberg for this.

Mark Zuckerberg has an impressive set of talents. He can 🖕 you, throw a spear, drink water, and wakeboard with an American flag. pic.twitter.com/5snjFVKEGx

Zuckerberg just shared this minute-long video of himself on Instagram, flying the US flag along the lake to the tune of, “Take me home- country roads.”
I think that is enough internet for today. pic.twitter.com/dJzeYNEwz9

The New York Post noted that “the video also drew comparisons to George Washington’s daring crossing of Delaware in 1776 to launch a surprise attack on unsuspecting British forces” even as “a reporter for the Australian Broadcasting Corporation shared a photo of the video alongside a 2016 photo of Zuckerberg going for a jog in Beijing’s Tiananmen Square.” The Aussie journalist added drily, “What a difference 5 years can make.”

While additional commentary noted that this could be an effort to shore up Zuck’s public image, in the end, it might have just been an awkward and goofy attempt to send a sincere message to fans and followers. The kind of thing that anyone who is not a billionaire CEO responsible for the world’s biggest and most controversial social media site might get kudos for.

Hey — the 4th of July is for celebrating the freedoms enjoyed by Americans everywhere. In this case, let Zuck be Zuck.

And let’s face it, that’s a really cool electric surfboard.