This is getting ridiculous… 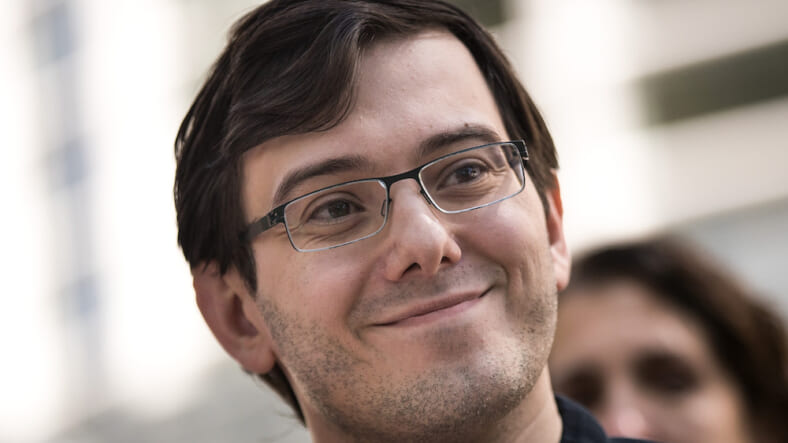 After Martin Shkreli was convicted of securities fraud in early August, he predicted, via livestream, that his sentencing would be “close to nil.”

The so-called “Pharma Bro” is used to screwing over other people and getting away with it, so naturally, he figured it would happen again. What he didn’t anticipate is that he’d get himself thrown into jail before that sentencing even occurred.

But that’s what happened on Wednesday when a federal judge had him locked up ahead of his sentencing in January. His crime? Threatening former Democratic presidential nominee Hillary Clinton, who’s currently in the midst of a tour for her new book, What Happened.

The treat came in the form of a Facebook post in which Shkreli offered his fans $5,000 to steal a piece of Clinton’s hair during her book tour, which started this week in New York City.

Shkreli edited the post to say he was joking and eventually deleted it, but prosecutors were afraid that anyone dumb enough to be a fan of this guy might be dumb enough to assault the former First Lady, U.S. Senator and Secretary of State.

They also argued that Shkreli’s history of making personal threats on social media demonstrated “an escalating pattern of threats and harassment.”

Shkreli ‘s own lawyer argued that his client is an idiot, but not a threat. “Stupid doesn’t make you violent,” Benjamin Brafman said.

The judge wasn’t buying it, citing a post Shkreli made the very next day that said “$5,000 but the hair has to include a follicle. Do not assault anyone for any reason ever (LOLIBERALS).”

“That is a solicitation to assault in exchange for money that is not protected by the First Amendment,”  Judge Kiyo A. Matsumoto said before sending Shkreli to jail, exposing his highly punchable face to an environment where faces are very regularly punched.