‘The Matrix’-Style Bracelets Could Turn Us Into Human Batteries 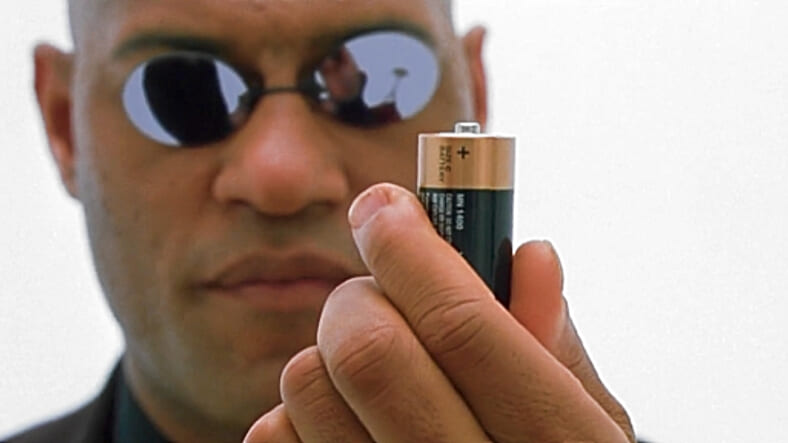 Today, in tech innovations that seem as inevitable as they are creepy, Reuters reports that scientists have created tech that could convert body heat into battery power. Just like in the iconic 1999 sci-fi thriller The Matrix.

One of the big reveals in The Matrix is when Keanu Reeves, as Tom Anderson/Neo, is shown what the world is really like—that he lives in the distant future, not 1999, and humans are no more than flesh batteries, our bodies’ thermoelectric energy powering cities controlled by machines.

In the “real” world Neo awakens after this revelation and barfs from his mind and body rejecting reality. It’s unlikely you will hurl after reading more details from Reuters about innovations that could lead to things like smartwatches that never require being plugged in to power up:

Tech-lovers could power their own watches or fitness trackers by wearing a stretchy ring or bracelet containing thermoelectric chips that convert heat into electrical energy, according to research published in the journal Science Advances… …“(Thermoelectric devices) can provide continuous power to wearable devices and could potentially replace batteries in the future,” said the paper’s senior author, Jianliang Xiao, told the Thomson Reuters Foundation in emailed comments.

Sounds pretty benign, right? Jianliang Xiao also told Reuters that he and other paper authors “hope this technology could, at least partially, solve the pollution problems of electronic waste.” He added that new power converter devices would be recyclable as well.

Reuters reports the technology could be commercially available within the next 10 years or so. For their part, researchers knew they’d have to lean into Matrix comparisons, advising that no one tells “the robots. We don’t want them getting any ideas.”

The Matrix-related jokes are tongue-in-cheek and meant to grab attention, but let’s not forget that Elon Musk is developing brain implant tech with his Neuralink project and Boston Dynamics regularly turns out videos (see the GIF from one above) demonstrating they can build robots capable of straight-up superhuman strength and agility.

Are we doomed? Maybe we’ll find some kind of answer to that question when the fourth Matrix movie premieres on December 22, 2021.