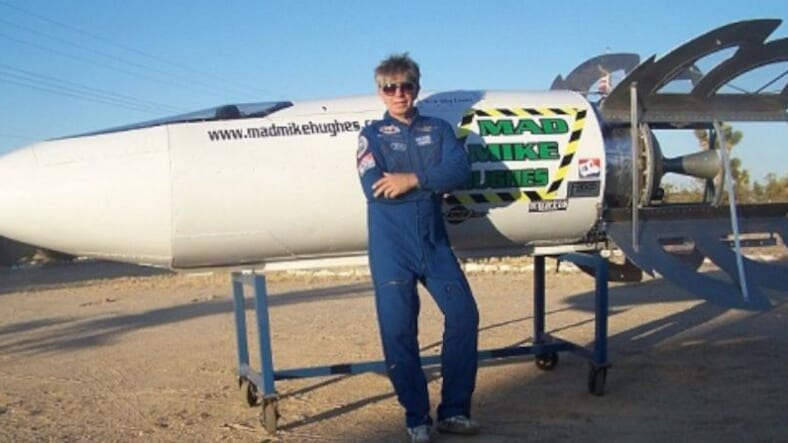 Sure, he pays the bills by working as a limo driver, but his daredevil inclinations put him up there with some of the most ambitiously reckless people the world has ever known. This guy’s aiming to be the next Evel Knievel—or perhaps die trying.

Don’t believe us? Well, maybe you will on April 2 when he attempts to pilot his homemade steam-powered rocket as it perilously hurtles across the 900-foot Palo Duro Canyon outside Amarillo, Texas at speeds of up to 350 mph.

Yeah, he wants to fly a homemade rocket over a canyon. If you think that sounds suicidal, don’t worry, because after the rocket fuel runs out, a parachute will (hopefully) deploy that will guide Mike and the rocket to the ground at a cool 15 mph. Nothing could possibly go wrong, right?

And he’s not stopping there. Mike’s next move will be even more incredible. According to Ars Technica, his greatest aspiration involves “ballooning up to 20,000 feet or so, releasing the balloon, and strapping a rocket to his shoulders in order to fly all the way to 62 miles above the planet, into outer space, before coming back to Earth.”

Assuming he survives all these ill-advised endeavors, we just might be looking at this generation’s next great stuntman.

Have a good flight, Mr. Hughes.