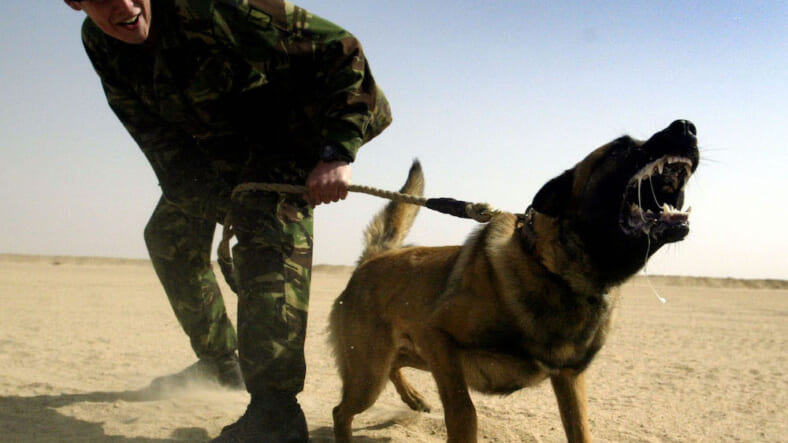 Dogs have been used in warfare since ancient times, but this story of a four-legged war hero proves that even today they are worthy combat companions.

Last month, a group of British Special Air Service soldiers traveling in a four-vehicle convoy from a training camp in Iraq hit an IED last month, and were soon ambushed by about 50 ISIS fighters.

After ditching their vehicles to take cover, the Brits attempted to retreat to safety only to be attacked from the rear by more enemy forces.

Surrounded, a US soldier traveling with the convoy unleashed his military-trained German Shepherd, and the dog promptly attacked two ISIS fighters, reports the Daily Star.

One jihadist was chomped on the neck and the face, the other was mauled on his arm and leg, and both were sent running, even after firing at (and missing) the determined dog with their weapons.

“The [dog] was with the team in a training role, but when the troops came under fire, it was desperate to get involved,” a source told the Star.

“When the dog was unleashed it went after the greatest threat without consideration for its own safety – this is what they are trained to do.”

The ambushed soldiers were able to hunker down and wait for cover from American support, which allowed them to get to safety. The unidentified dog returned from the firefight unharmed, reportedly with its tail wagging. Let’s hope he got an extra treat for his heroism in combat.