This Is the Most Detailed Photo of Our Galaxy Ever Captured 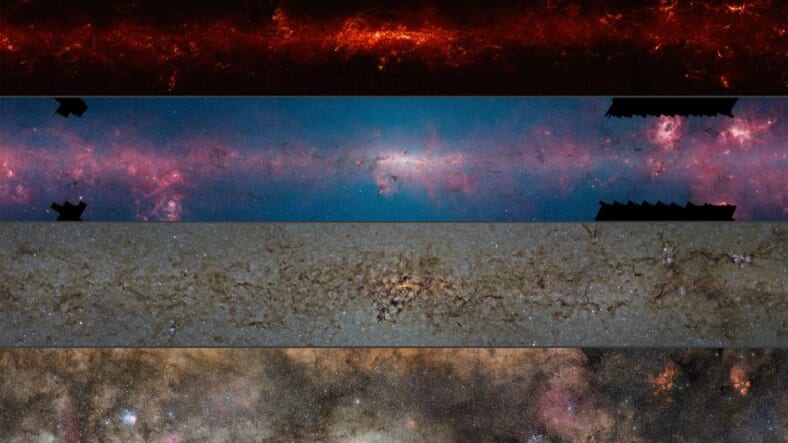 You’d be forgiven for thinking the panoramic image above was an artist’s fanciful rendition of the night sky, and maybe it is — if you consider a submillimeter telescope an artist.

In fact, it’s an extraordinary photograph of the Milky Way, taken by the APEX radio telescope in Chile’s Atacama Desert, that was released yesterday by the European Southern Observatory. Called ATLASGAL (The APEX Telescope Large Area Survey of the Galaxy), it is the most detailed image of the galaxy to date.

But despite its appearance, the survey is not a single photograph but a composite of more than 700 observations taken over several years by the telescope, which sits about 16,700 feet above sea level on the Chajnantor Plateau in Chile’s Atacama region. This, in part, explains the image’s surreal luminosity.

This kind of telescope magnifies and clarifies what it sees in the dusty regions of the universe where new stars come into being. Those typically cold places, filled with dense gas, are “often dark and obscured due to the dust,” says the ESO, “but they shine brightly in the millimeter and submillimeter part of the spectrum.”

In other words, this photo composite reveals what is hidden to the human eye, and even other telescopes, thanks to the 40-foot telescope’s extraordinary power of magnification.

The APEX mapping project took more than three years (from July 2007 to November 2010), ESO scientist Carlos De Breuck told CNN, because of the sheer size of the survey. Now that it’s complete, he says, “We can for the first time get a full census of the star-forming regions within our own galaxy.”

Check out the video below or click on the zoomable 187 million pixel image to explore the galactic plane in greater detail.