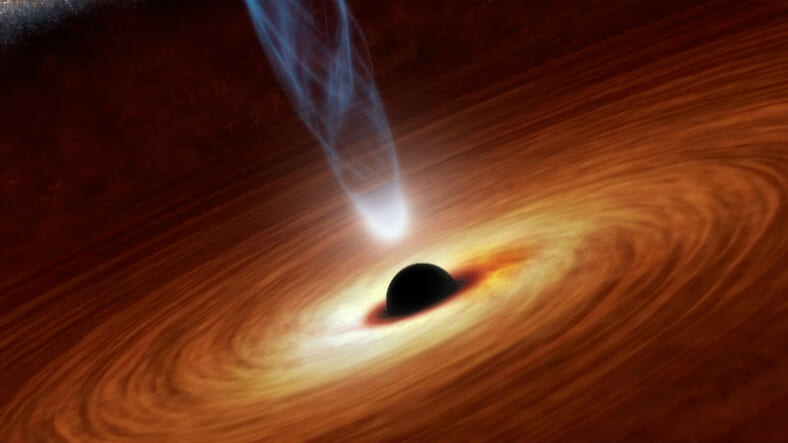 Australian astronomers have discovered a celestial object that could spell the death of the Milky Way if it was any closer. It’s rapidly growing and it eats stars like it’s popping chips.

It’s called a “supermassive black hole,” and it’s just as scary as it sounds.

Earth is not actually in any danger, and after all, we’d know if there was any black hole nearby, due to all the planets sliding over the blue event horizon with time stopping along the way. That’s what black holes do—they present an object so powerfully magnetic that even light can’t escape.

This monster is far away, but no less impressive, reports Phys.org:

“This black hole is growing so rapidly that it’s shining thousands of times more brightly than an entire galaxy, due to all of the gases it sucks in daily that cause lots of friction and heat,” said Dr Wolf from the ANU Research School of Astronomy and Astrophysics.“If we had this monster sitting at the centre of our Milky Way galaxy, it would appear 10 times brighter than a full moon. It would appear as an incredibly bright pin-point star that would almost wash out all of the stars in the sky.”

In imagining great cosmic nightmare scenarios, the existence of something like that even one galaxy way beats out a bunch of green, huge-headed aliens coming to take Richard Dreyfuss away.

The other good news is this thing is millions of light years away. Even the Millennium Falcon couldn’t make that trip.

For now, astronomers will spend a great deal of time determining the origin of this unusual black hole in order to better understand the structure of the universe.