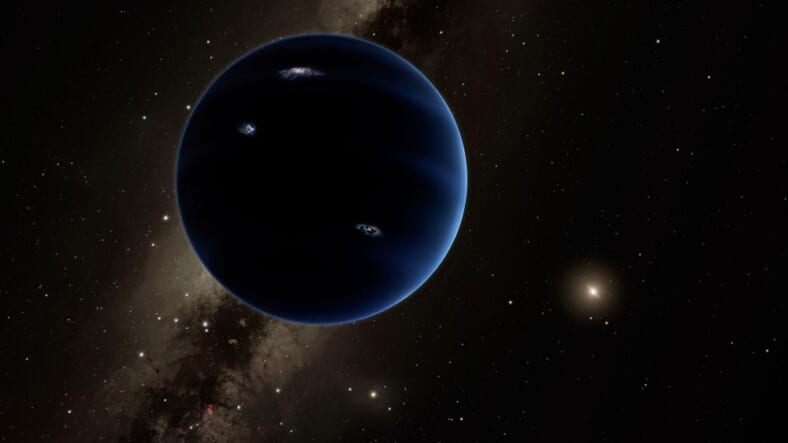 Our solar system is about to get a little bit bigger. National Geographic reports that scientists have concluded there’s probably a mystery planet says it may well be out there traveling in a long, strange orbit around the Sun. It might be exciting for Pluto lovers to see any headline about this solar system possibly restoring its planet count to the traditional 20th century number of nine, but we’ll stop you right there. The planet in question — if it exists at al l— is a good deal larger than Earth and damned elusive.

The mystery planet, or Planet X, is far beyond the orbit of dethroned 9th planet Pluto and tumbling around in the Kuiper Belt, a ring of odd, icy objects that trace their own weird orbits around our solar system’s periphery. As noted by National Geographic, the Astronomical Journal report outlining the findings by a team of Caltech and UC Santa Cruz scientists revealed some pretty detailed conclusions about Planet X:

The team calculated that the planet, if it’s there, would be about 10 times as massive as Earth, or roughly three times larger. That makes it a super-Earth or mini-Neptune—a type of planet the galaxy is incredibly efficient at assembling, but which has been conspicuously absent from our own neighborhood.

The planet is so far away, it’s hard to see how it really counts as part of this solar system, save that there isn’t a closer star. The scientists calculated it never gets any closer to the Sun than about 300 times the Earth’s own distance, and Caltech’s Konstantin Batygin told National Geographic that the planet is “on an exceptionally frigid, long-period orbit” that may take “on the order of 20,000 years to make one full revolution around the sun.”

Astronomers determined Planet X’s likely existence after concluding that the gravitational pull of a mystery planet may be responsible for the odd trajectories of Kuiper Belt objects.  One of the scientific team’s big clues that the planet might exist came from a planet called Biden, a planet or proto-planet found beyond Pluto’s orbit. It was Biden’s weird orbit, so similar to another object called Sedna, that indicated something larger was affecting their movements. So while scientists haven’t seen the planet with their own eyes (or any other scientific equipment), but the data is enough to imply that it’s there.

Planet X, the mystery planet, Nibiru, Hank, whatever you want to call it … this celestial object won’t be easy to identify in the night sky. As Biden discoverer Chad Trujillo told National Geographic: “We don’t know exactly where it is, or else we’d just point the telescope at it tomorrow and it would be right there. But the sky is really big and this thing might be pretty faint, depending on how far out it is.”

We’d be perfectly okay with Pluto coming back into the fold. It has a giant heart-shaped feature on it. Who doesn’t find even a tatted-up dwarf planet pretty cool?