No one threw a Christmas party like the former First Lady. 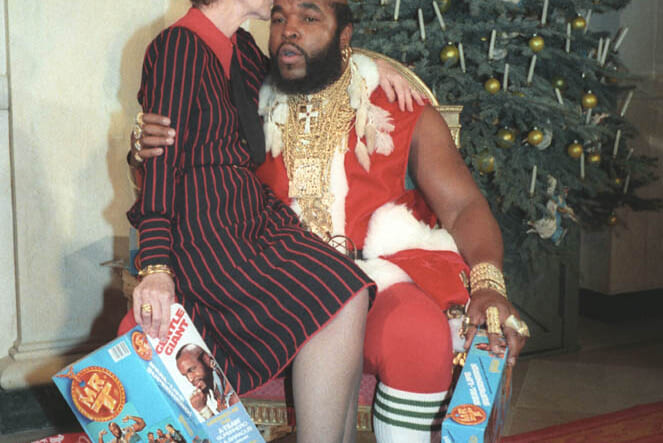 Former First Lady Nancy Reagan passed away this weekend. While she is perhaps best remembered for her “Just Say No” anti-drug crusade, let it be known that she also hosted one of the most rocking Christmas parties in White House history.

On December 12, 1983, Mrs. Reagan invited none other than Mr. T to play Santa Claus for the unveiling of the White House Christmas decorations. At one point in the merrymaking, Mrs. Reagan seized her chance to sit on Santa’s lap for a photo. She then gave him a big, wet kiss on the forehead.

It was a photo-op that surprised many, not least because of Mr. T’s rugged persona on The A-Team.

Speaking about the event to The Independent, Mr. T said, “Nancy Reagan was campaigning to get kids to say no to drugs, and they heard about me going round schools telling kids to stay away from drugs. It was a real honor for a black kid from the ghetto who grew up on welfare.”

TMZ broke the news that the legendary First Lady died from congestive heart failure at her home in Bel Aire, CA after years of ailing health. She will be buried next to her late husband at the Ronald Reagan Presidential Library in Simi Valley.

If this photo is any indication, Mrs. Reagan lived a hell of a life.