No word yet on whether or not they’re inhabited by Kardashians. 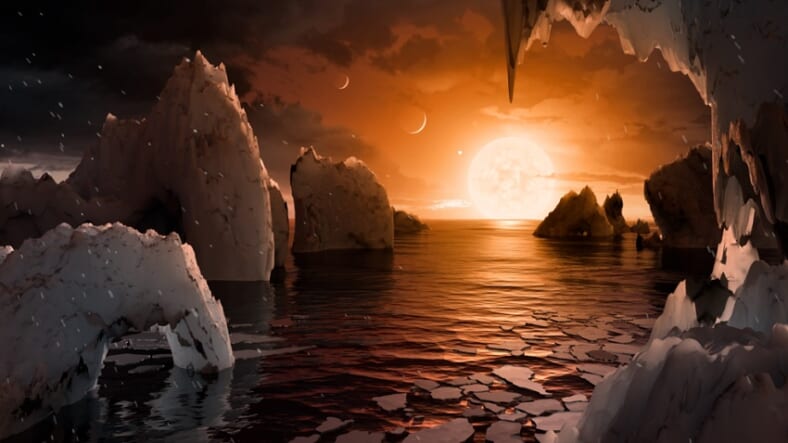 Wednesday NASA dropped a bomb with the announcement that astronomers have discovered not just one, but seven rocky, possibly Earth-sized planets in a solar system 40 light years away. Identifying the distant celestial bodies would be impressive enough, but the Space Agency also believes these worlds fall squarely in the so-called “Goldilocks Zone” around the small, cool, dwarf star named Trappist-1.

This means that all of the planets could conceivably hold water, and therefore life. From NASA‘s announcement:

“This discovery could be a significant piece in the puzzle of finding habitable environments, places that are conducive to life,” said Thomas Zurbuchen, associate administrator of the agency’s Science Mission Directorate in Washington. “Answering the question ‘are we alone’ is a top science priority and finding so many planets like these for the first time in the habitable zone is a remarkable step forward toward that goal.”

No one should be loading up on chips and soda for a drive to check them out, though—they’re 235 trillion miles away, in the constellation of Aquarius. Cosmically-speaking, that’s close, but it’s obviously beyond the reach of any spacecraft in existence today.

The planets in the Trappist-1 solar system also exist under radically different circumstances from our own, as NASA explains:

In contrast to our sun, the TRAPPIST-1 star – classified as an ultra-cool dwarf – is so cool that liquid water could survive on planets orbiting very close to it, closer than is possible on planets in our solar system. All seven of the TRAPPIST-1 planetary orbits are closer to their host star than Mercury is to our sun. The planets also are very close to each other. If a person was standing on one of the planet’s surface, they could gaze up and potentially see geological features or clouds of neighboring worlds, which would sometimes appear larger than the moon in Earth’s sky.

If we were able to travel to any of these worlds we would definitely encounter a situation straight out of the wildest sci-fi video game or film. For instance, NASA also believes the planets are locked into their home star’s gravity in such a way that they don’t rotate, but have permanent night and day sides.

According to NASA, that means “they [might] have weather patterns totally unlike those on Earth, such as strong winds blowing from the day side to the night side, and extreme temperature changes.”

NASA will know more about this fascinating system in the coming years as they launch more sophisticated space telescopes and direct them at Trappist-1.

In the meantime we’re stuck wondering if there is anyone there looking back, and if they’d have wi-fi once we did come to visit.