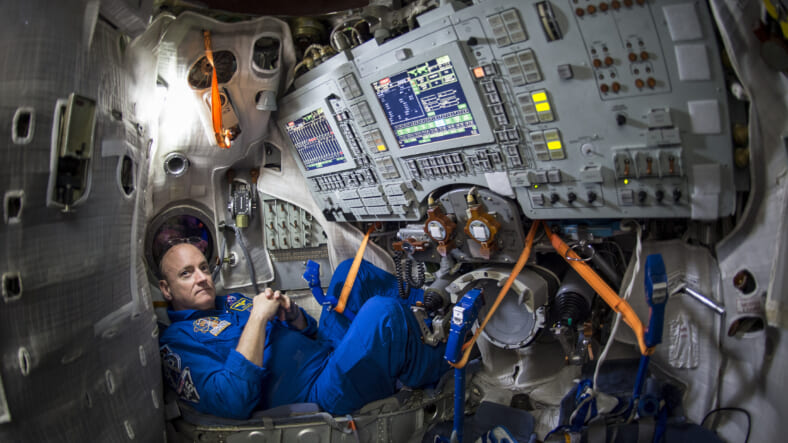 Rocket man Scott J. Kelly is headed home on Tuesday—to Earth, that is—after an astonishing 340 days in space aboard the International Space Shuttle. Though it’s not a world record (that belongs to a Russian Mir mission, which logged 438 days in 1994-95), NASA astronaut Kelly’s nearly year-long sojourn in orbit is a record for an American. Alongside Russian cosmonaut Mikhail “Misha” Kornienko, who’s accompanied Kelly on the mission, he’ll be catching a ride aboard the Soyuz TMA-18M spacecraft, the same craft that brought them up on March 28, 2015. It’s due to land on the steppe of south-central Kazakhstan this evening at 11:27 p.m. EST on Tuesday evening.

The duo’s mission on the orbital laboratory has been a mash-up of the banal (think daily personal hygiene at the speed of a caterpillar), the extraordinary (just have a look at Kelly’s breathtaking photographs #YearInSpace, which have won him 900,000 Twitter followers), and everything in between.

#Countdown We're down to a wakeup. #Earth. I'm coming for you tomorrow! #GoodNight from @space_station! #YearInSpace pic.twitter.com/kLe2755XyG

Kelly and his team’s mere presence aboard the shuttle will provide scientists reams of biomedical data with which to study the effects of weightlessness on the human body. Most studies to date have used data from astronauts on six-month, not year-long, stays. “Misha and I are only one data point in this goal to have people live and work in space for longer periods, with the hopes of someday going perhaps to Mars,” Kelly said at a press conference shortly before takeoff in Russia. Their data will be compared with that from shorter stays, including a six-month spaceflight by his twin brother, Mark Kelly, a retired NASA astronaut, to see what the physical effects of longer-duration space travel are on the human body.

The team has done a lot more than eat and sleep in the tight quarters of the ISS. Data compiled by the New York Times says they’ve orbited the Earth a remarkable 5,440 times (that’s 19 times a day), traveling roughly the equivalent of a one-way trip to Mars (143,846 total miles); experienced a combined 10,944 sunrises and sunsets; spent about 648 hours on a treadmill (about two a day for six days a week), to limit the effects of zero gravity on bone and muscle mass; and taken part in 400 experiments, including tending a dedicated greenhouse, à la The Martian.

“All of this,” NASA continues, “was in addition to regular duties of station maintenance, including three spacewalks”

One of biggest contributions Scott has made, though, in a “giant leap for mankind” kind of way, is his extraordinary photography. He posted a total of 913 photos, an average of about two a day, on Twitter. “I have taken a lot of pictures because I’ve been up here for a long time,” Kelly said during a recent press conference. “I’ve definitely taken some good ones and some memorable ones.” His Earth-bound followers would no doubt agree.

On February 25th, likely revealing a bit of giddiness about his impending journey home, Kelly posted a video of a gorilla-like creature moving about in the space station. “Needed a little humor to lighten up a #YearInSpace,” he wrote. (The gorilla suit came up in a special delivery from Earth, though we don’t know when.)

Needed a little humor to lighten up a #YearInSpace. Go big, or go home. I think I'll do both! #SpaceApe

Four days later, Kelly handed over command of the space station to American astronaut Tim Kopra, who’s been aboard the ISS since December 15, 2015.

You’d think Kelly would be ecstatic to leave the ISS after so long, but something he said during a news conference, also on February 25, suggested otherwise. “I could go another 100 days. I could go another year if I had to. It would just depend on what I was doing and if it made sense.”

For live coverage of Kelly and his team’s return to Earth: NASA TV will start coverage today at 20:10 UTC; you can watch on NASA TV or on NASA’s HD UStream channel. We wish Kelly and his crew a smooth, and safe, landing.