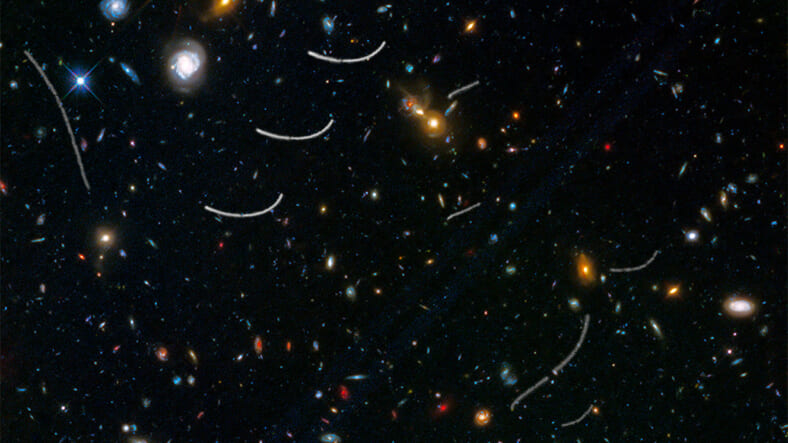 Thanks to the human ego, it’s easy to feel like the world revolves around you, and you’re the most important thing to happen to planet Earth.

But if you ever start to feel a little too significant, here’s something to remind you that you’re smaller than a speck of dust in the Universe and you don’t really matter in the grand scheme of things:

Holy shit, right? But that’s just an illustration of the planets and stars in our galaxy, which is only one among billions of other galaxies in the Universe.

So, here’s something from NASA that’ll really blow your mind and make you feel weird about your own existence. Take a look and soak it in:

That snapshot, my friends, was taken from NASA’s Hubble Space Telescope, and shows more galaxies, clusters, and space than our feeble human minds can even attempt to comprehend.

In the picture, which NASA underwhelmingly describes as “a random patch of sky,” you can see basically the whole fucking cosmos, with hundreds of spiral galaxies, star clouds, moons, asteroid trails, and probably (definitely) aliens.

To put things into perspective just a little more, one of those tiny spirals is a galaxy, and if one galaxy, namely the one we live in, contains all of our recognized planets and stars – the sun, Jupiter, Sirius, and over one billion other stars – you can kinda sorta almost begin to understand just how unfathomably large the Universe is.

For instance, this is the Large Magellanic Cloud, which is simply a satellite galaxy of the Milky Way. It’s HUGE, yet super tiny relative to the entire Universe.

“Galaxy clusters contain hundreds to thousands of galaxies bound together by gravity. Dark matter and dark energy play key roles in the formation and evolution of these clusters, so studying massive galaxy clusters can help scientists to unravel the mysteries of these elusive phenomena.

“Intruding across the picture are asteroid trails that appear as curved or S-shaped streaks. Rather than leaving one long trail, the asteroids appear in multiple Hubble exposures that have been combined into one image. Of the 20 total asteroid sightings for this field, seven are unique objects. Of these seven asteroids, only two were earlier identified. The others were too faint to be seen previously.”

Lastly, let me conclude by saying that the picture above depicts something called the Hubble Ultra Deep Field, which is believed to show around 10,000 galaxies, and is only a teeny tiny sliver of the Universe — around 3.4 arcminutes diagonally.

When you add two and two together and do some very rough math, we can roughly estimate that there are about 100 billion galaxies out there. Probably more. Goddamn.