This is WAY more exciting than ‘The Last Jedi.’ 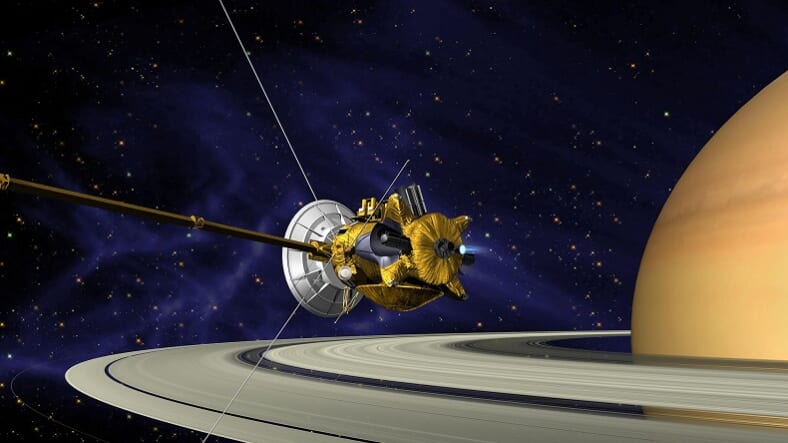 Since the last astronaut walked on the Moon in the 1970s, space has been kind of quiet. There have been probes sent to Mars, amazing photos made, and plenty of travel into orbit, but let’s face it, the adventure factor has been dialed back.

It seems like NASA is gearing up to change that in the coming decade, in ways both big and small. Two examples: The billion dollar New Frontiers-4 mission to send one sophisticated probe to Titan, Saturn’s largest moon, and another to Comet Churyumov-Gerasimenko.

This week the space agency picked a pair of probe “candidates” culled from a dozen proposals for the missions.

The probe that heads to Titan would be named “Dragonfly.” The candidate, made by Johns Hopkins’ Applied Physics Lab, would have a complex mission, reports Popular Mechanics:

Dragonfly (…) would land on Titan using a conventional parachute, take samples and spectroscopic readings to determine the composition of the surface and the atmosphere, and then fire up its eight rotors, two at each corner, and fly to another location. The primary mission of the Titan drone would be to study the prebiotic chemistry of Titan and search for signs of liquid water, habitability, and even life.

The other possible future probe would be called CAESAR. If it gets the nod, it will likely have an even harder job than Dragonfly:

CAESAR (…) would give planetary scientists the opportunity to study cometary material in unprecedented detail here on Earth. Samples of a comet, composed of a significant amount of ice, along with samples from asteroids and other primitive space rocks, are absolutely essential to learning the history of the solar system’s formation. The exact composition and structure of these celestial bodies can only be determined through detailed microscopic spectroscopy studies conducted here on Earth. We need to help our scientists get their hands on as much of this precious material as possible.

So now it’s kind of a beauty pageant for the pair, where the “beauty” is in how well they will function in the harsh and unpredictable conditions encountered on such long journeys through space.

Okay, that’d make for a hell of a boring reality show. Hopefully we can get one of the UFOs we recently learned the Navy has encountered involved to really mix things up.