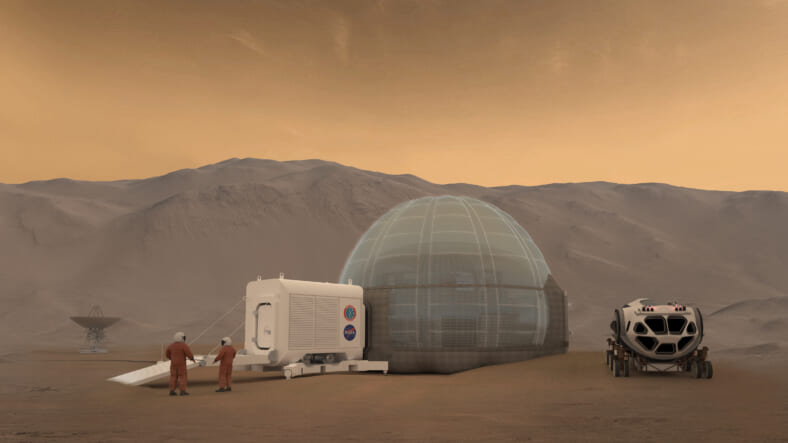 How many ideas do you have for ways to build habitats on Mars to support human life? NASA has more than 165 such plans, thanks to entrants in the Centennial Challenges design contest.

3rd Place. Team LavaHive proposed gluing the loose rocks and soil lying on the surface of Mars (regolith) into layers with adhesive to form the shapes of the needed structures. This would provide airtight buildings that not only protect against wind and sand, but also against radiation, which is critical because Mars lacks a magnetic field like Earth’s to shield against solar and cosmic radiation.

2nd Place. Team Gamma’s runner-up proposal is to launch an army of autonomous 3D-printing robots to Mars that will drive around working industriously like Wall-E. But instead of collecting trash, they will gather regolith and melt it into shape using microwaves to create structures.

An interesting aspect is that, like Wall-E, these robots will freelance, so that instead of building programmed, pre-designed structures, they will be given rules and objectives so they can adapt on the fly. This will let them work even if communications fail. (Which should be good as long as we can prevent them from falling in love with one another.)

1st Place. The winning entry was from Team Ice House, which proposed a design that uses a large inflatable dome covered in 3D-printed ice and topped with, wait for it, regolith.

The ice layer exploits water’s radiation-absorbing properties to provide maximum protection from cosmic rays in a structure that is entirely above ground. The dome’s design not only allows residents to move around inside without space suits, but it is also suitable for growing plants, which would surely be beneficial.

Or, at least it helped Matt Damon, the botanist, in The Martian, so we think it sounds like a good idea.