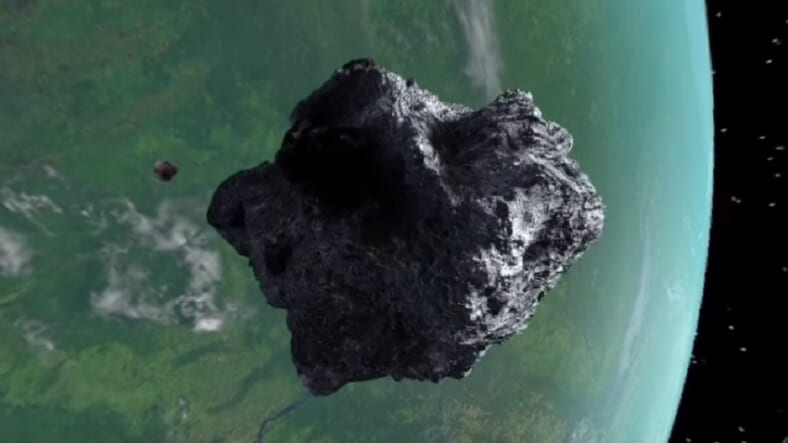 The immersive video recreation of the Tunguska asteroid event from June, 1908 gives you a pretty good idea of what a rock the size of a large building might do even if it burst in the atmosphere. The narrator warns at the end that a similar event could happen again.

It certainly could. That’s why NASA keeps an eye on any big asteroid that comes within an astronomical stone’s throw of Earth—like 2002 AJ129.

No worries, nothing like the destruction of Paris in Michael Bay’s Armageddon will happen. While the asteroid is, in the Daily Mail‘s words, “the size of the Burj Khalifa,” it will only come within 2.5 million miles of Earth when it passes on February 4.

That is, in cosmic terms, a damn close brush with a rock that could destroy a city. And the Mail reports the space agency does consider 2002 AJ129 a “potentially hazardous” object.

Astronomers who keep an eye out for NEOs—Near Earth Objects—examine anything that comes within 4.8 million miles, because random celestial objects could potentially ping-pong one off course at any time, putting our planet in danger.

The flash of light that lit the night sky in Michigan on Tuesday is likely a meteor, the National Weather Service says https://t.co/097sAJl5zJ pic.twitter.com/PMwpSz6GbC

And while 2002 AJ129 is said to be safe for now, the Earth is subject to dramatic impacts or near-impacts every day. The skies over Michigan were recently lit by an exploding meteor that was merely six feet long—but its powerful airburst registered as a 2.0 magnitude earthquake.

So—we’re okay for now, but let’s hope NASA maintains those watchful eyes on the sky.