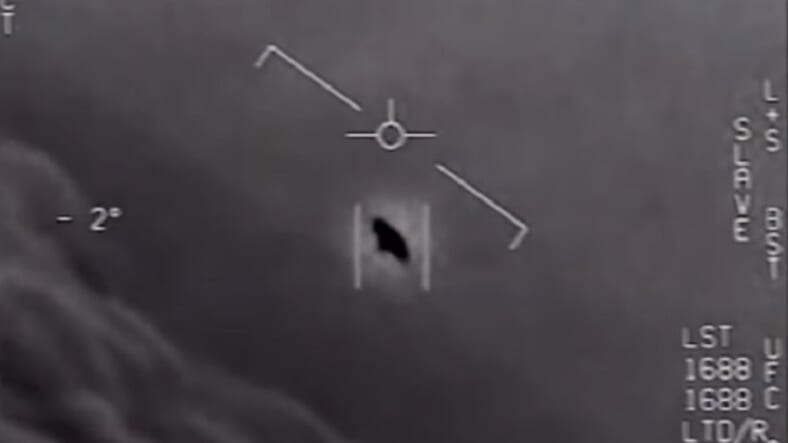 There’s growing evidence UFOs are real, and that evidence doesn’t just come from former Blink-182 frontman Tom DeLonge. It also comes from the most legit witnesses imaginable: The highly capable and well-trained pilots of the United States Navy.

To say Unidentified Flying Objects are real is not to confirm the existence of aliens. It’s acknowledging that there’s a history of sightings made by witnesses who are anything but wild-eyed paranoiacs living under lean-tos in the woods.

The New York Times reports that between March 2014 and the summer of 2015 alone, Navy pilots filed reports about “objects had no visible engine or infrared exhaust plumes” which “could reach 30,000 feet and hypersonic speeds.”

More from the NYT:

“These things would be out there all day,” said Lt. Ryan Graves, an F/A-18 Super Hornet pilot who has been with the Navy for 10 years, and who reported his sightings to the Pentagon and Congress. “Keeping an aircraft in the air requires a significant amount of energy. With the speeds we observed, 12 hours in the air is 11 hours longer than we’d expect.”In late 2014, a Super Hornet pilot had a near collision with one of the objects, and an official mishap report was filed. Some of the incidents were videotaped, including one taken by a plane’s camera in early 2015 that shows an object zooming over the ocean waves as pilots question what they are watching.“Wow, what is that, man?” one exclaims. “Look at it fly!”

The specificity of these reports should be enough to give even the most hardcore skeptic some pause.

But, again, that doesn’t mean we’re talking about bug-eyed creatures from distant planets. The Defense Department, while—probably grudgingly—acknowledging members of the military regularly see stuff in the skies that makes no sense, doesn’t see it as all that weird.

On that point, the Times spoke with Leon Golub, an astrophysicist with the Harvard-Smithsonian Center for Astrophysics.

Aliens being inside the objects “is so unlikely that it competes with many other low-probability but more mundane explanations,” Golub told the Times.

He also said there were plenty of other possible explanations, like “bugs in the code for the imaging and display systems, atmospheric effects and reflections, neurological overload from multiple inputs during high-speed flight.”

Pilots are willing to go on the record regarding UFOs but they aren’t willing to go the aliens route. Yet they’ve seen things, man. And stuff, like aircraft that can hover, “fly at 30,000 feet and right at the surface” but all without jet engines or exhaust plumes.

It could well be there is something here on Earth that science doesn’t quite understand behind all these strange incidents—something with an explanation that doesn’t render physics pointless or require the presence of E.T. Perhaps this is the century we find out what that is.