Trident Adventures, a company owned by two ex-Navy SEALs, teamed up with the Four Seasons Oahu for a VIP dive package that takes luxury to new depths. 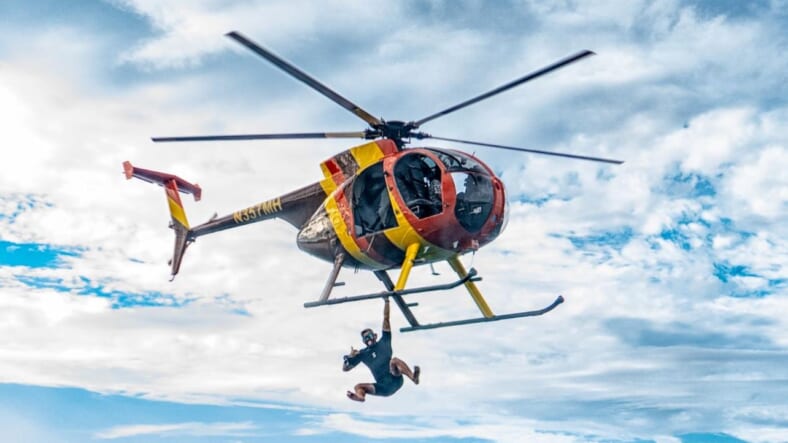 “Are you ready to jump out of a helicopter” isn’t a phrase you typically hear at 7 a.m. on a Saturday. But that’s exactly what I was about to do moments after having my morning cup of coffee. No, I hadn’t gone crazy; I was in Hawaii to try a new Navy SEAL diving experience.

Two retired Navy SEALS, Stephen Kaplan and James Beck, recently decided that they wanted to take their wild adventures in the military and craft a bucket list-worthy activity for travelers. So, they created Trident Adventures and partnered with Four Seasons Resort Oahu at Ko Olina to take luxury to new depths. The result? An array of escapades that you won’t find anywhere else in the world. And that’s how I ended up hanging on to the edge of a helicopter hovering 30 feet above the ocean.

While they offer a myriad of aquatic opportunities like introductory dive tours and children’s PADI Bubble Maker programs in the Resort’s serenity, they’ve also created the Navy SEAL for a Day itinerary that pushes you beyond the limits of what you thought possible.

You start the day early at Ko Olina Marina, Oahu’s only privately-owned deep-draft marina, where you quickly feel part of a military operation. After Kaplan’s enthusiastic welcome, he dives into the “operation” for the day using military terms like “helocast” (aka jumping out of a helicopter) and “cast master” (aka the person helping you jump out of a helicopter). He describes the rest of the unit that includes a combination of the world’s best water rescue experts, ship captains, divers, and pilots. Not to mention the two Navy SEALS leading the way.

“We have the best in the industry,” Kaplan told me. “We also had a high turnover rate in the beginning because we make sure that our staff is at the right level. Our standards are infinitely higher than industry standards.”

It’s this “invisible bubble of safety,” as Kaplan called it, that made me feel like I could leap out of a helicopter after a couple of dry runs on the ground. “Just sit here and let your leg dangle out while we’re flying,” Kaplan said as he demonstrated what was about to happen in the air. “That’s what we do in the SEALS, just holding a gun.”

Moments later and after a quick refresher on scuba diving equipment—because I was going diving immediately after jumping out of the aircraft just as a SEAL would do—I was in the back of seatless helicopter leg dangling out the side with nothing but a wetsuit on and my diving mask wrapped around my arm. The pilot lifted off and took us on a wild military-style ride over a Jurassic Park-looking mountain range.

With my adrenaline pumping, we headed back to the dive site where the boat, jet ski, and crew awaited my sky-high plunge. The moment had come. Hovering nearly three stories in the air, Kaplan slid out on to the landing slides, turned to me, and said, “You ready? Seatbelt off.” Remembering what I had learned during my on-ground practice session, I too slid out on to the landing sides with my hands grasping where a door would normally be.

“Remember, cross your arms and legs,” Kaplan said before I took a deep breath and leaped.

About halfway through the drop, I thought to myself, “Well, that was higher than I thought,” but a second later, I hit the water, and it was all over. I gave the “OK” signal when I popped back up to the surface, where I was met by a jet ski to escort me to a boat where the dive part of my Navy SEAL experience would begin.

Of course, Kaplan needed to get in the water too. So, he prepared to jump while casually wearing sunglasses and a baseball hat . But not before enjoying a little fun of hanging on to the bottom of the helicopter as it took a quick spin around.

Once on the boat, you get geared-up to go diving with arguably the best divers in the world. I jumped into the ocean  to embark on the sea portion of my day. After all, SEAL stands for “Sea Air and Land.” Sticking to their high standards, Trident Adventures opts to utilize the Waianae west coast, as it has the best diving on Oahu and isn’t dependent on seasons.

Once under the surface, Kaplan led me to the ocean floor where we swam with a sea turtle, held a starfish, and watched schools of fish float by. But this was a Navy SEAL, so we pushed it one step further. He led the way to the opening of an underwater cave, handed me a flashlight, and into the opening we went.

As I peered into the darkness with my light, there was a white tip reef shark just relaxing. Yes, a cage-free shark dive is just par for the course when you’re with a SEAL. And just to make sure I got the full experience, Kaplan whipped out a couple of DPVs (diver propulsion vehicles), and we cruised around for another hour watching the marine life zip by.

For more experienced divers, you can opt for a deep-sea wreck dive or multi-tank dive. You can also take it even a step further by booking a full Navy SEAL for a Day training program that includes skydiving and tactical training before jumping out of a helicopter and going for a dive.

“What we do is create an invisible bubble of safety around you so that you can take the next step out of your comfort zone,” said Kaplan.

Even Hawaii 5-0 actor Alex O’Loughlin was blown away, saying in a statement that “diving with US Navy SEALs is to dive with the absolute best of the best. The attention to detail these guys have in every aspect of the experience, for every person they take out, is unmatched in the industry.”

And what’s great about the partnership with the Four Seasons: After a day of once-in-a-lifetime adventure, you can return to pure luxury. The fairly new property has quickly become regarded by locals and visitors alike as one of the best on the island.

There are five onsite restaurants. One of which is La Hiki, which serves  up a rare cut of Japanese A-5 Waygu ribeye that literally melts in your mouth. That same eatery hosts an epic weekend brunch complete with an entire seafood room; the fuel-up before or after your epic day on the water. Meanwhile, Naupaka Spa is the perfect spot to relax with a “Warrior Massage” after a wild day.

Though the SEALs might be used to sleeping in less than desirable conditions, it doesn’t mean you have to. Book a cabana at the adult-only infinity pool to enjoy a post-adrenaline nap and stay in one of the ocean-view suites complete with a private balcony to fully recharge overnight.

There is a breed of traveler who seeks the exhilaration of the elements (whether hiking, surfing, or diving) in combination with five-star luxury,” Charlie Parker, General Manager at Four Seasons Resort Oahu at Ko Olina, told me. “Oahu is the perfect playground for this kind of adrenaline-fueled adventure, while the Four Seasons offers an enclave of luxury to return to at the end of the day. The Navy SEAL for a Day experience just takes it to the next level.”

The most luxurious element of all? Creating a bucket list item I never even knew I had.