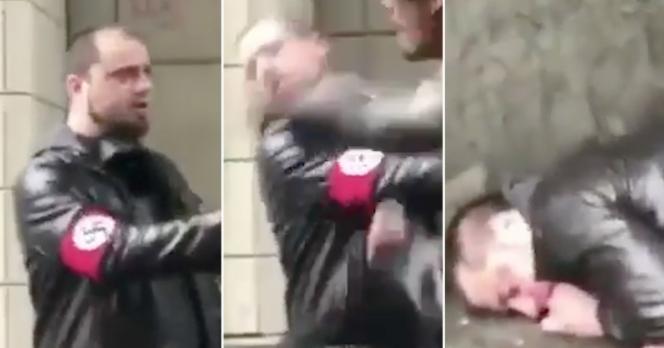 A guy wearing a Nazi armband on the streets of Seattle got knocked the hell out by a much larger man who took umbrage at his offensive attire and rhetoric.

You can watch the one-punch beatdown courtesy of the New York Post above.

“Night-night,” a bystander says, moments after the man wearing the swastika gets punched out.

“Ain’t got nothing to talk about,” the puncher says as the Nazi sympathizer crumples to the ground.

Seattle police officials Monday confirmed reports of a man sporting a swastika armband, saying he was “instigating fights.” But the individual refused to cooperate when approached by officers.

“Police were on scene in 5 mins & found him on the ground. He declined to provide info about incident & left after removing his armband,” the department tweeted. “No one else at the scene contacted officers to make a report about the incident.”

The KO was the result of a culmination of social media efforts that began when Twitter user @bigotbasher tweeted a photo submitted to him by a third party of a man riding Seattle’s D-Line bus with the hashtag “#AntiFascistAlert.”

“Submitter said they were harassing a black man on the bus,” he tweeted along with a picture of the man.

The image was quickly circulated on Reddit and other Twitter accounts as social media users began to hone in on his location.

User @teethnclaws, a self-described “anti-fascist”, posted the approximate location of a “Nazi in downtown Seattle” matching the bus rider’s description who was “screaming in people’s faces.”

Shortly later, the confrontation was over.

The man with the Nazi armband was put to sleep on the pavement within 90 minutes starting from the time @bigotbasher’s original post began getting pick-up.

Seattle police officials were on the scene minutes after the Nazi sympathizer was slugged, but he came to and walked away after (wisely) taking off his armband.

Police were on scene in 5 mins & found him on the ground. He declined to provide info about incident & left after removing his armband.(2/3)

No one else at the scene contacted officers to make a report about the incident.(3/3)

For once, a story involving Nazis has a happy ending.