‘Nightmare on Elm Street’ House On Sale Through Halloween 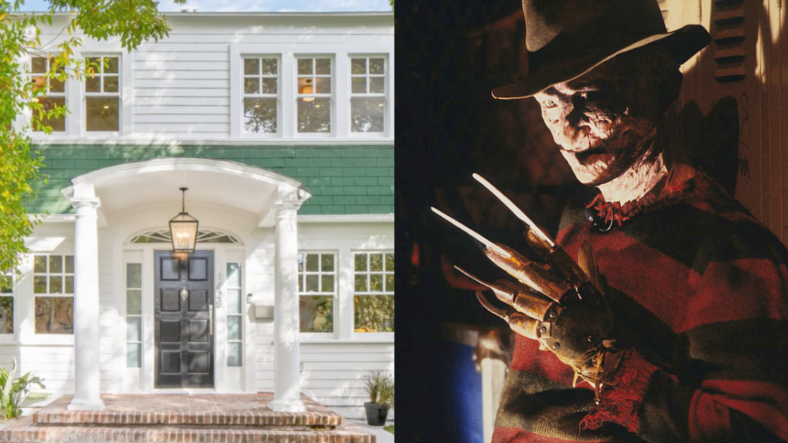 If settling down for a good night’s sleep inside a house once haunted by the razor-tipped fingered demon ghost known as Freddy Krueger sounds like your kind of fun, here’s one hell of an opportunity: The home featured in the original Nightmare On Elm Street. It’s on sale now for $3.25 million.

But there’s a catch when it comes to owning this piece of horror movie history: Buyers need to have their bids in by midnight on October 31—Halloween.

This iconic location is in LA’s Spaulding Square neighborhood. The address was 1428 Elm St. in Wes Craven’s 1984 horror classic, but the property is actually located on North Genesee Avenue.

The Dutch Colonial-style house was built in 1919. It has three bedrooms and 3½ bathrooms and—of course—the pool Freddy Kruger is enjoying in the image above.

If you find yourself genuinely spooked by the home’s link to the movie, fear not. According to an LA Times interview with the realtors representing the property, “the ties to the movie stop as soon as you walk through the front door. Inside, it’s a beautiful traditional-style space with a modern twist.”

The Times has more on living with the location’s fame:

“The whole neighborhood gets the tour bus treatment. People always get tickled when they see it,” said Heather T. Roy of Douglas Elliman, who holds the listing with Learka Bosnak.

“Inside, it’s a beautiful traditional-style space with a modern twist,” [Bosnak] said.

The Nightmare on Elm Street house is a homey, pleasant place if you forget about the movie association. The new owners will look out their picture windows each day to see terraces and patios as well as nicely landscaped yards with citrus trees. There’s also a guest home on the property that sports a “designer” bathroom, kitchen and covered patio.

So unless you’re worried Freddie might be “coming for you” as the kids sing in the movie, just be sure to get your offer ready before that midnight deadline. Who knows what might happen if you’re too late?