Looks Like North Korea Just Challenged America to a Dance-Off, Which Is Certainly Better Than Nuclear War 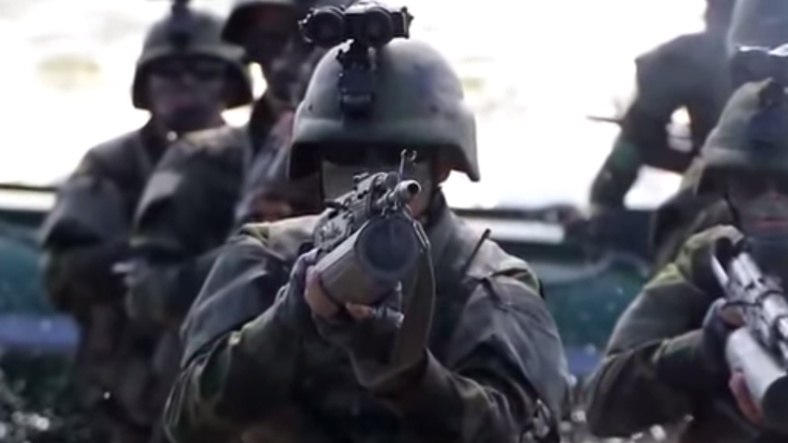 The Hermit Kingdom just put America on notice: we’ve been served. That’s right, the latest menace from North Korea isn’t a missile lobbed into the Sea of Japan, it’s sick-ass dance moves from a troupe of camouflaged men.

This video comes by way of Gizmodo, who noted its publication on Thursday by the DPRK’s propaganda arm, DPRK Today.

It’s unclear as to what the video’s purpose really is, but spliced among the dancing scenes there is footage of soldiers in special ops mode. They’re seen doing beach maneuvers as well as armed combat in the field.

Gizmodo’s post points out that there’s nothing overtly challenging in this video. It doesn’t end with the words “You got served” flashing on the screen.

In reality it could be a random piece of propaganda that’s just a little wackier than the DPRK’s usual fare. It could also be a weird distraction from the communist dictatorship’s plan to send up another missile or three. The “distract them with killer dance moves while we shoot ICBMs at their shores” tactic the Soviets never perfected.

If it is a challenge to the Great Dance-Off which will decide whether the world is consumed in nuclear fire, does the United States have an equivalent capacity?

We’ve got the biggest nuclear arsenal in the world, true, but we may be screwed here.

With North Korea there’s always a chance another shoe could drop. They could go for an open-mic poetry slam next. Or a drinking contest—which we’re sure they’d lose.

Either way, don’t get in your dance-proof bunker yet.