North Korea Claims Missile Test Guarantees It Could Strike US

This would be a very bad idea for North Korea. 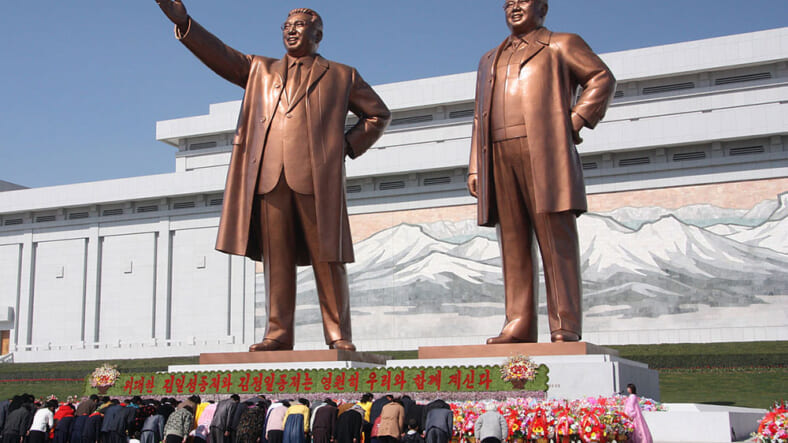 North Korea claimed Saturday that its military had tested an intercontinental ballistic missile — ICBM — that could one day be used to strike North America.

Many observers, reported the AFP, are skeptical of any such claims made by the Hermit Kingdom. They believe the communist dictatorship’s ruling party is essentially puffing out its chest in the run up to “a showcase ruling party congress” in May, the AFP reported.

That said, intelligence officials do believe there’s some actual fire behind all the North’s smoke regarding nuclear capability. And Kim Jong Un is personally invested, of course, according to the AFP report:

According to the North’s official KCNA news agency, the ground engine test was ordered and personally monitored by leader Kim Jong Un.As soon as Kim flagged off the test, “the engine spewed out huge flames with deafening boom”, KCNA said.“The great success… provided a firm guarantee for mounting another form of nuclear attack upon the US imperialists and other hostile forces,” Kim was quoted as saying.

Kim went on to claim his military has the ability to “tip new type inter-continental ballistic rockets with more powerful nuclear warheads” and that puts any location, “including the US mainland” — within reach.

On one hand this really is just another in a series of threats from the bellicose nation, which went as far as issuing a video depicting an attack on Washington in late March. On the other hand, with intelligence officials expressing more and more concern that North Korea may be capable of doing something damaging — at least to neighbors in the region such as South Korea and Japan — the temptation to view Kim Jong Un as a blustering buffoon may be misguided.

Even with that crazy haircut of his.