“The conflict would yield one of the worst mass killings in the modern age.” 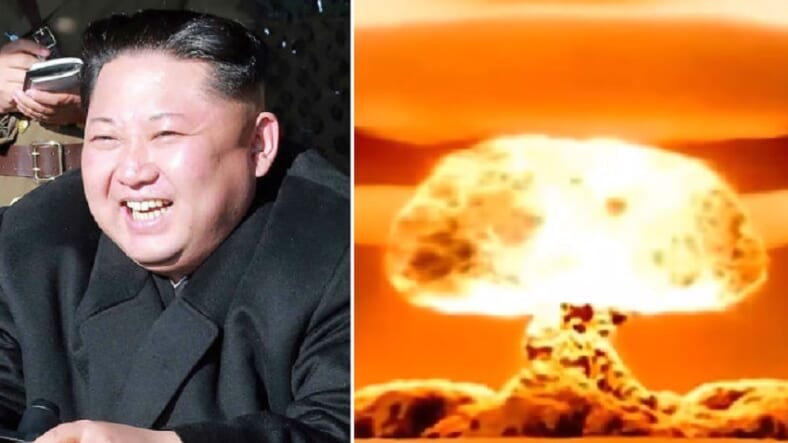 North Korea launched yet another missile Thursday. It rocketed over the Japanese island of Hokkaido, setting off news alerts across Japan and alarm around the world.

The BBC reported that the missile “reached an altitude of about 770km (478 miles), travelling 3,700km before landing in the sea off Hokkaido.”

American Matthew Galat lives on Hokkaido and recorded the Japanese alert about the missile. His video with an echoing voice warning residents to get to shelter is eerie, to say the least.

Sirens echoed in the streets of Hokkaido after North Korea launched a missile over northern Japan https://t.co/EcECtDjFdY pic.twitter.com/Zi3VX4L1E9

US Secretary of State Rex Tillerson addressed the launch in a succinct statement:

North Korea’s provocative missile launch represents the second time the people of Japan, a treaty ally of the United States, have been directly threatened in recent weeks.
These continued provocations only deepen North Korea’s diplomatic and economic isolation.United Nations Security Council resolutions, including the most recent unanimous sanctions resolution, represent the floor, not the ceiling, of the actions we should take. We call on all nations to take new measures against the Kim regime.
China supplies North Korea with most of its oil. Russia is the largest employer of North Korean forced labor.
China and Russia must indicate their intolerance for these reckless missile launches by taking direct actions of their own.

North Korea’s increasing aggression certainly may inspire many to think the next option for states under threat from the Hermit Kingdom is some kind of military move—strategic bombing or even a “decapitation,” removing the country’s top officials.

Military action would be enormously complicated. The New Yorker recently reported in an extensive look at the problem of nuclear war with North Korea that America hasn’t always been clear on just what a threat the DPRK truly could be:

U.S. intelligence has often underestimated the progress of North Korea’s weapons development. But now the basic facts, accumulated by American, European, and Chinese intelligence agencies, are clear. North Korea has between twenty and sixty usable nuclear warheads, and ICBMs capable of hitting targets as far away, perhaps, as Chicago. It has yet to marry those two programs in a single weapon, but American intelligence agencies estimate that it will achieve that within a year. The U.S. is in the process of upgrading its ability to shoot down an incoming missile. It reportedly tried to derail North Korea’s weapons development through cyber sabotage, but it only delayed the progress. A former U.S. official said, “You spend millions putting it in place and then you ask, ‘Did it work?’ And the answer comes back: Maybe.”

Additionally, the New Yorker article notes the fact that at least 200,000 Americans live in South Korea. Citing a 2012 study, it states that “sixty-five thousand civilians would die on the first day” of some kind of full-on nuclear conflict between the US, South Korea and the North, and many thousands more after.

“U.S. and South Korean forces could eventually overwhelm the North Korean military,” writes the New Yorker, “but, by any measure, the conflict would yield one of the worst mass killings in the modern age.”

That’s just one huge complication to factor into any armed conflict against the DPRK. There are many more, including the West’s poor understanding of how wily Kim Jong Un could be, and how truly unified the North Korean people are in their devotion to him.

There may be some kind of military response to North Korean provocations in the future. It may be unavoidable. But nothing about it will be easy, or simple.