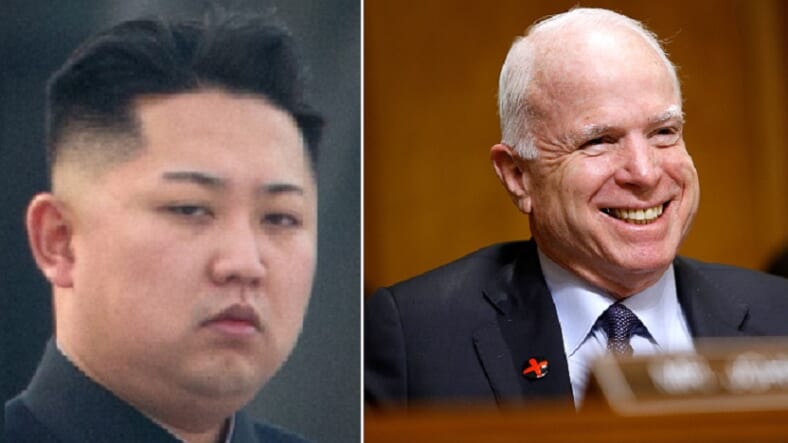 Regardless of your political beliefs, you have to admire Senator John McCain‘s complete inability to give a damn when it comes to voicing his opinions on nutty dictators. A good example: He recently landed a pretty sick burn on the volatile ruler of North Korea that prompted the Hermit Kingdom to rattle their sabers even harder than usual and threaten the cranky Arizona Republican.

Speaking to MSNBC’s Greta van Susteren, McCain said, “China is the only one that can control Kim Jong-un, this crazy fat kid that’s running North Korea.” McCain went on to make the point that North Korea’s steady rise in nuclear power and general aggression toward the rest of the world could be torpedoed—so to speak—by Beijing in no time through economic measures.

The Democratic People’s Republic of Korea said through the Korean Central News Agency that the statements were an affront to the “dignity” of Kim and were “tantamount to a declaration of war.”“The service personnel and people of the DPRK are regarding the dignity of their supreme leadership as their life and soul,” it said, according to KCNA Watch, adding criticism of Sen. Ted Cruz (R-Tex.) for saying that North Korea is a state sponsor of terrorism.

North Korea went on to make more noise about its nuclear capabilities in typically overblown style, stating that “the DPRK with its nuclear force for self-defense as its pivot will fulfill its sacred mission of devotedly defending its supreme leadership representing the destiny and life of its people by dealing a merciless sledge-hammer blow at those daring hurt the dignity of the supreme leadership like a puppy knowing no fear of the tiger.”

McCain’s tweet in response was the pugnacious war hero at his best:

What, did they want me to call him a crazy skinny kid? https://t.co/Ym3juRfBev

No one wants “fat-shaming” to lead to nuclear war, but no one—including North Korea’s allies, most likely—would disagree about the crazy part.