And check out his Instagram, which documents his work on the ground. 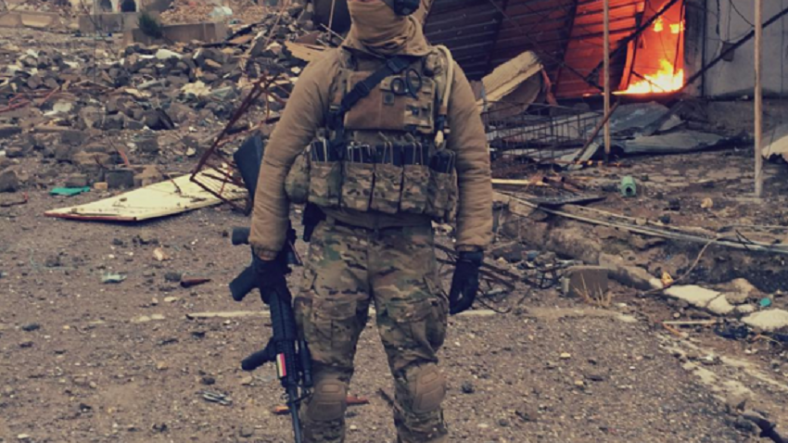 He goes by “Mike,” or at least that’s the nickname used by Norwegian press. Mike was born in Iraq and raised in Norway — but now he’s fighting ISIS full-time. Mike’s Instagram account details his return to the battlefield as a volunteer. A veteran who’d fought in Afghanistan, Mike elected to head off on a new adventure after returning to Scandinavia — fighting alongside the Kurdish Peshmerga putting the boots to the Islamic State in the area around Iraq’s potentially vulnerable Mosul dam, the Daily Caller reports.

Mike wanted “to be a part of fighting the ISIS terrorists,” he told a Norwegian paper in January.

According to the Daily Caller, Mike’s fight is personal:

While Mike’s real identity is anonymous, he revealed that he came to Norway as an Iraqi Kurdish refugee at a young age in the 1980s. After serving with Norwegian forces in Afghanistan, he returned to his place of birth to put an end to ISIS.

His Instagram is a fascinating and sometimes gruesome study of the war up close:

Thank you all for 51.000 followers! Never imagined I would get so much attention for sharing what's basicly my everyday life now. I greatly appreciate the support and love you guys are constantly showing me. And a special thanks to @ba_frm_va, @handgun12, @greatazcoins and my personal friend @jhicks780 for donating and helping me out financially. Thanks, guys! Here's the guys that whacked the Islamic State snipers I mentioned in my last post. It's the same guys I met during the Sinjar operation last year, some kind of special unit from Duhok. Like I said, we had a problem with the snipers taking well-aimed shots at us and we had a hard time locating them too. These guys showed up after a while, with their armoured vehicles and a bulldozer. The bulldozer removed a part of our berm and the guys drove out, looking for the jihadists hiding in the tall grass. A Humvee drove out first and they didn't drive more than a 100 meters before they found the first sniper. The guy who was on the .50 caliber machinegun pointed his Kalashnikov straight down and emptied a whole magazine right next to the vehicle. He then got back on the .50 caliber machinegun and fired several burst in the same spot. I can only imagine the mess he must have made out of that guy. They found two more snipers as well, all very close to our positions and probably the same guys who had been firing at me earlier. The coalition jets took out several snipers too… they dropped bombs in the grass around us a couple of times and I wasn't sure what they were bombing untill I saw a guy spinning 15 meters up in the air. Pretty cool they decided to spend one bomb on a single guy. That probably saved some lifes, because these guys had decent sniper-training. And yeah, my buddy who got injured, is out of the hospital and will have a full recovery. I know some of you have been praying for him and we all appreciate it a lot. #kurdistan #peshmerga #punishthedeserving

Throwback to November, 2015. An Islamic State fighter who recieved a headshot with what I'm guessing was large caliber ammunition, perhaps a .50 caliber bullet. The top of his skull was cracked wide open, his brains were missing and his neck was broken as a result of the headshot. Good stuff. I'm still recieving messages pretty much every single day, with people asking me how to join the fight. I don't like to be rude, but I'm consistently deleting all messages that contains this question for two reasons. First, I'm not in a position where I can help people join the Peshmerga, and second, the different groups that are recruiting westerners on social media, are often promising more than they can keep, or they're simply scamming people for money and I won't be a part of that. My advice for those of you who are sending me these messages, is to join or keep serving in your own country's armed forces. And if you can't for some reason, buy licensed firearms and learn how to use them, take private classes and learn how to perform first aid and how to survive in the wild. Fortune favours the prepared mind. Have patience, guys… this war is far from over, and sooner or later, it will come to your homes, thanks to our leaders open door policies. If you still decide you want to join one of these groups I mentioned (and don't ask me for their names), then my advice for you is to be critical to their promises and obviously, don't send them any money for gear or weapons in advance. Again, sorry for deleting the messages, but it's a waste of both mine and your time…

Part 2/2. Me and my new friend from the Islamic State. Continuing the story. We drove off in our pickup trucks and passed the point that was later to be the Southern front of Sinjar. We stopped at a village that looked abandoned and decided to set up a checkpoint southwards and search the village. We entered the first houses and went from room to room, but didn't find anyone. At the same time, a few villagers showed up and told us the Islamic State fighters had passed the village from Sinjar last night, and that there were only civilians here, muslim kurds. We told them they could come out from their hiding places, and they did. Once they saw we were Peshmerga and not yezidi militias, which they fear will retaliate against them for what the Islamic State did to the yezidies in Sinjar, they welcomed us as liberators. The villagers flocked around us, cheering for the Peshmerga and the general, kissing us and shaking our hands. The older men was actually crying of relief and we were served tea and bread. We got the names of some of the villagers that had either collaborated with, or was members of the Islamic State, so we drove around in the village and hunted these guys down. We arrested three guys in total and took them to an abandoned house for questioning. They got treated pretty decent, except for the guy in the photo… he had an attitude that some of the guys had to beat out of him. We said goodbye to the villagers and went back to Sinjar with the prisoners. We didn't see any action that day, which was a big dissapointment for me personally… but we did good. We caught four Islamic State members and the liberation of Sinjar is a major defeat for ISIS and the begining of their end. After Ramadi, Tal Afar and Hawija is taken back from the Islamic State, Mosul will be next, and I'll do my best to be there as well. #peshmerganor #evilforevil

Mike’s work against the Islamic State is reportedly funded by donations sent through his site as well as merchandising — one good example being a t-shirt which he promoted by posting a photo of his girlfriend wearing it and little else.

A big thanks to @556_productions for helping me fund my campaign by selling these awesome shirts for me. The Evil for Evil shirt sale went over all expectations as we sold close to 200 shirts in only three weeks. Unfortunately, the international shipping cost went up during the sale and the extra expenses came out of my profit. Never the less, I'm still very happy with the end result and more important, we've had only positive feedback from my supporters. If you've bought a shirt and haven't done so already, post a photo of yourself wearing the shirt and use the 'peshmerganor' hashtag so we can see the awesomeness! #peshmerganor #556productions #evilforevil #bestgirlfriendever

In a recent Insta post Mike had some advice for anyone who wanted to follow in his footsteps, writing that he wanted to “remind you guys that I can’t help anyone join the Peshmerga. I’m sorry, but questions about recruitment won’t be answered.”

Like any true warrior, he seems to know that his work isn’t for everyone, and wants to make sure his followers on social media understand.