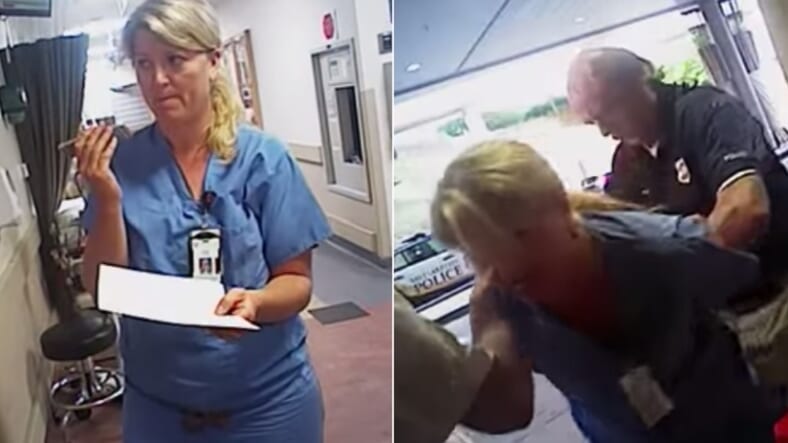 A Salt Lake City, Utah nurse named Alex Wubbels was simply trying to follow her hospital’s policies last July when a cop lost patience and essentially tried to scare her into submission. Fortunately, the incident was captured on video.

Now Salt Lake City detective Jeff Payne is suspended from his regular job and his bosses are issuing apologies.

The Deseret News reported on the video Thursday:

Wubbels was working her shift as a charge nurse, or a liaison between patients and doctors and hospital managers, at University Hospital’s Burn Unit when she was handcuffed in the middle of her work area, pulled outside and put into a police patrol car for about 20 minutes.
She was arrested after refusing to give Payne vials of blood that he needed for an investigation because she said he did not have a warrant or meet any of the mandatory criteria needed for taking blood.

Payne wasn’t even seeking the blood of a suspect but of the surviving victim in a wreck in which the other driver died.

Wubbels can be seen in video of the incident patiently trying to clarify hospital policy. But Payne was unmoved, saying, “I either go away with blood in vials or body in tow.”

He also defends his actions in the video, saying, “I’m doing what I’m being told by my boss, and I’m going to do what my boss says.”

The mayor’s statement said in part that the actions on the video were “completely unacceptable to the values of my Administration and of the values of the Salt Lake City Police Department.”

“I extend a personal apology to Ms. Wubbles,” continued Mayor Biskupski, “for what she has been through for simply doing her job.”

In his statement, Chief Brown said “we take this very seriously.”

“Immediate steps were taken and within 12 hours,” according to Brown, and “body cam footage was reviewed and an internal affairs investigation started. We’ve looked at the actions that took place, the policies that could have prevented it, and the training that must be done. Within 24 hours of this incident, Salt Lake City Police Department took steps to ensure this will never happen again.”

Most importantly, Brown stated that “we apologized for the incident and promised to find a solution.”

Alex Wubbels and her attorney have not filed any kind of suit against the Salt Lake police or Detective Payne yet.

But after watching the video, it’s easy to understand why they might.