This did NOT end well. 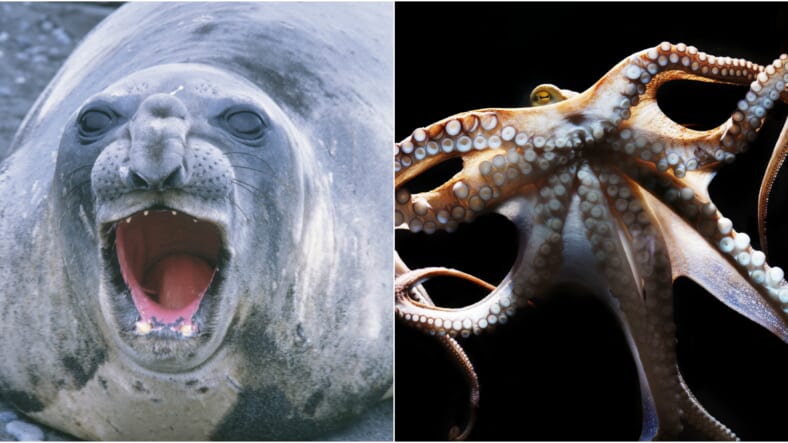 Last week footage emerged of a massive squid grappling with a paddle-surfer, and now there’s viral video of a giant octopus battling a seal in a watery death match.

A kayaking guide and a group of tourists witnessed an incredible life-and-death fight between a massive fur seal and a giant octopus in New Zealand earlier this week.

Conner Stapley, a guide with Kaikoura Kayaks, saw thrashing on the surface of the water and soon realized the large male seal was attacking the octopus.

Stapley and the three tourists he was accompanying got front-row seats to the gruesome battle, which was won by the hungry seal.

Other groups from Kaikoura Kayaks have reportedly seen similar scraps, which can last up to 20 minutes.

“This octopus had no chance really. Seals love eating them and will eat up to 15 pounds of octopus a day, around here it is a staple part of their diet,” Stapley said.

This isn’t the first time that a deadly battle between a seal and an octopus has been caught on camera. In 2015, a harbor seal and a giant Pacific octopus were filmed fighting off Ogden Point in Canada. That battle also was won by the seal.

You can watch that footage above, and FWIW, it’s way gorier than the more recent seal vs. octopus smackdown: