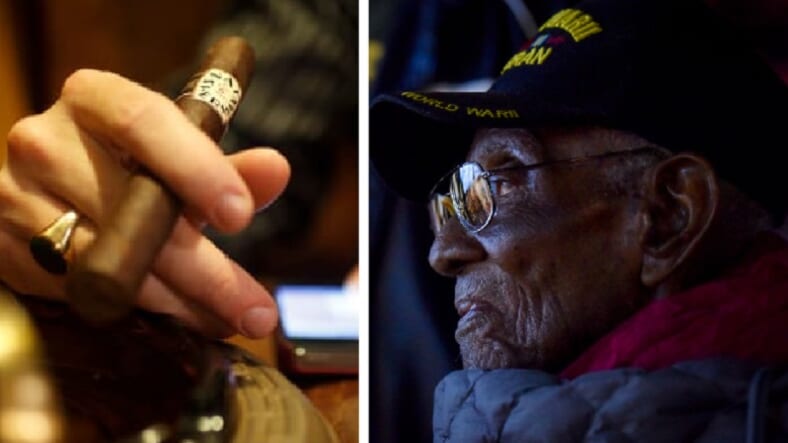 Richard Overton gets up very early each morning. His caregiver helps him through his morning routine, then he packs his pair of cigars away and prepares for another day.

Overton is 112 years old. He is the oldest man in America, and the oldest living military veteran. He’s also a role model. He proves some people can smoke cigars, drink coffee, eat what they want and still outlast us all.

The Dallas News reports Overton sounds like he’s just fine with having lived so long. “…I have no pains, no aches,” he tells the paper.

Asked how he does it? “Just keep living, don’t die.”

Happy 112th birthday to America’s oldest living man and WWII veteran, Richard Overton. Born in Bastrop County in 1906, Overton served in the South Pacific. He resides in his home in East Austin, where he enjoys cigars and drinking whiskey on his front porch. Photo c/o @statesman. pic.twitter.com/gldtLZQczW

As annoying media personalities on Twitter say, let that sink in. Overton makes it sound simple, but the fact is, he must have some pretty killer longevity genes. Here’s a day for the man, per the News:

Every morning, his caregivers make him multiple cups of coffee. Overton takes it with three spoonfuls of sugar and a plastic straw. He likes sweet things. He eats waffles, pancakes or cinnamon rolls for breakfast. He enjoys ice cream and peach cobbler for dessert. He loves Dr Pepper, which he calls “sweet juice.”His four caregivers switch between 12-hour shifts. They do anything Overton wants. Massage his feet. Pull up the blinds. Pour him his favorite drink, a whiskey and Coke. He can be demanding, because even with his loss of independence, he’s still the man of the house.

Being 112 hasn’t prevented Overton from being ready to kick ass. In 2017 he reportedly pulled a .38 on an unfamiliar caregiver. The police had to come and kindly persuade the centenarian to stand down.

The News reports Overton has outlived most of his immediate family, and he’s pretty chill about death, saying “I didn’t know when I came here, and I don’t know when I’m going…That’s God’s work.”

A short documentary made when Overton was a youth of 109 gives further insight into how to live.

Smoking, drinking, eating ice cream and pulling guns on strangers sounds like a damn good way to roll once you reach the triple digits. A lot of people dread living that long. It’s not like you’re going to be running marathons.

It’s kind of crazy to read about Richard Overton, who apparently got to 112 by enjoying himself.