The Oregon Standoff Is Officially Over

Here’s what you need to know. 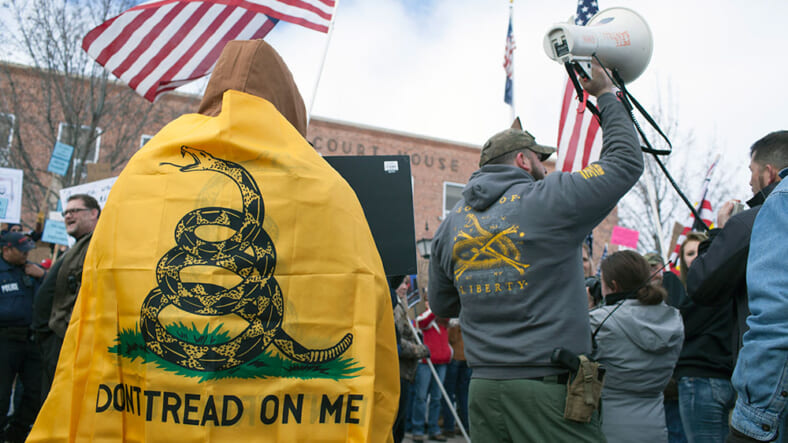 Update, 2/11/16, 2:00 PM ET: David Fry, the final protester left at the Malheur National Wildlife Refuge, surrendered to police Thursday. Fry had sounded suicidal on livestream, but his apprehension was peaceful.

Original post: The last protesters occupying the Malheur National Wildlife Refuge in southeastern Oregon may soon leave federal property. What isn’t clear is whether they’ll leave in law enforcement custody or be allowed to go home.

The four remaining holdouts in the Refuge’s headquarters — Sean and Sandy Anderson, Jeff Banta, and David Fry — told authorities that they would peacefully exit the complex they’ve occupied since January if police allow Nevada politician Michele Fiore and the Reverend Franklin Graham to accompany them. The group initiated a back-and-forth with the FBI late Wednesday after agents in armored vehicles closed in, according to the livestream the group was broadcasting at the time.

The Oregonian‘s Les Zaitz reported that the crisis point in the long-term standoff “provided a remarkable front row seat for the nation to listen in as the holdouts faced the FBI move. At points, a phone left on inside the occupiers’ camp picked up demands from agents over loudspeakers.” Listeners heard law enforcement commands for the protesters to exit with their hands up, as well as the protesters’ panicked exchanges with the authorities and among themselves.

Around the same time the authorities closed in on the holdouts, Reuters reported infamous Nevada rancher Cliven Bundy was arrested in Portland as he was en route to Malheur. Bundy’s sons Ryan and Ammon, who were leaders of the protest when it began in early January, were already in custody. Cliven Bundy was at the center of his own anti-government standoff in 2014 due to a long-standing disagreement with the U.S. Bureau of Land Management over use of federally-controlled lands. Les Zaitz tweeted that the elder Bundy was taken in on charges connected to the 2014 confrontation:

BREAKING: Cliven Bundy arrested in Portland Wednesday night on federal charges for the 2014 standoff in Nevada with federal agents.

The final group was set to give themselves up around 8 a.m. PST Thursday, though it wasn’t clear if conditions they’d attempted to set with police and federal law enforcement were agreed to.

We will update this post with any further developments.